When you think of the stereotypical image of a pot smoker, you might imagine someone who sits on the couch all day, watching Cheech and Chong movies while surrounded by pizza and chocolate. And in some cases, this might not be all that far from the truth. Therefore, it seems perfectly reasonable to assume that most stoners might be heavier than your average person.

However, it appears that this assumption could not be further from the truth. While there is no denying that weed causes increased appetite, generally known as ‘the munchies,’ it seems that pot smokers actually tend to be slimmer than those who do not partake. And although medical marijuana may be used to help people with chronic conditions to gain weight, an average, healthy person is not likely to be affected in the same way.

You might be wondering how these opposite effects are even possible, and if so, you are not alone. Scientists have been scratching their skulls over this question for years, and it seems that they are finally closing in on a solution.

Read on to learn more about the complex relationship between marijuana and weight gain, and the scientific reason why pot smokers are skinnier than non-pot smokers…

The Relationship Between Marijuana and Body Weight

When you first think about the relationship between weed and weight, you might immediately associate the herb with weight gain. This is perfectly reasonable since medical marijuana is often used to help increase body weight in people with wasting syndrome due to HIV/AIDS or cancer. Cannabis may also be useful for people with other types of appetite or eating disorders such as anorexia.

Marijuana improves appetite and assists weight gain by stimulating the endocannabinoid system. The endocannabinoid system is an essential regulatory system within the body. It helps to maintain homeostasis by controlling factors including mood, movement, and pain perception. It also regulates the desire for and enjoyment of food.

The endocannabinoid system is designed to work with compounds known as endocannabinoids. Our bodies produce these chemicals which regulate the above factors by binding with receptors known as CB1 and CB2 receptors. However, when it comes to appetite regulation, it is primarily CB1 receptors which are involved.

CB1 receptors are found in their highest concentrations in the brain and central nervous system but are also present in digestive tissues. When endocannabinoids bind with these receptors, they trigger a myriad of different reactions. These include altering the nerve pathways associated with smell and taste to make food more palatable, as well as stimulating the appetite. Endocannabinoids also play a crucial role in metabolism and the storage of energy in cells.

When you smoke pot, its chief psychoactive compound, THC, behaves similarly to endocannabinoids in the body. This is what causes the phenomenon known as the munchies. As well as making you feel hungrier than usual, this response could make you more likely to crave high-energy, high-calorie foods. It is no coincidence that a grease-laden takeaway tastes so much better when you’re high!

From an evolutionary point of view, these responses would have helped humans to maintain homeostasis by encouraging us to eat more in times of plenty and store excess energy ready for times when food became scarce. However, we now have such easy access to energy-dense foods that it can be all too tempting to go overboard.

With all this in mind, is it really possible that pot smokers are less likely to put on weight than non-pot smokers? According to scientific research, it most certainly is!

Research on Weed and Weight Gain 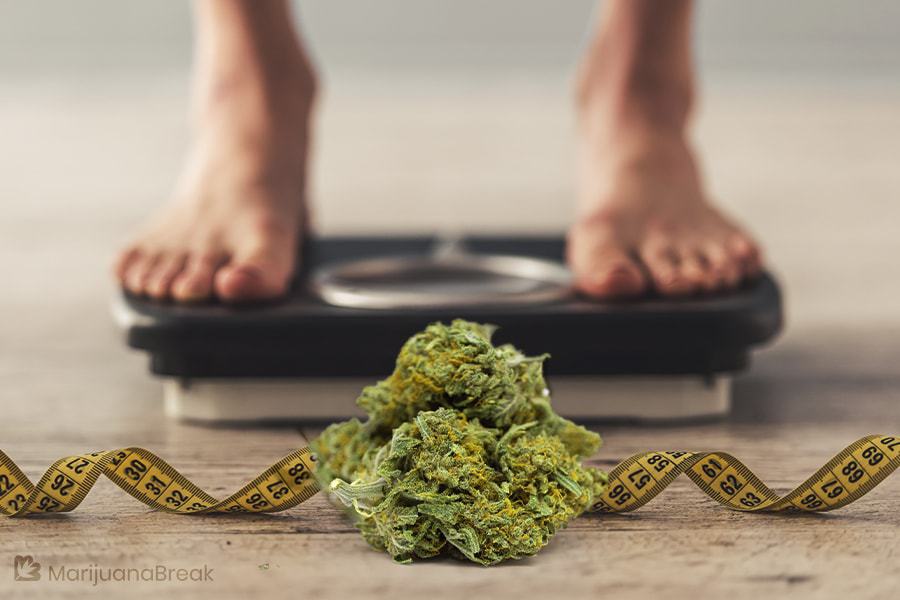 Although cannabis may be helpful for people trying to gain weight, several research studies have found that in healthy people, smoking weed could help to keep your body mass index (BMI) below average over time.

A paper recently published in the International Journal of Epidemiology looked at the relationship between cannabis and BMI using data from the National Epidemiologic Survey on Alcohol-Related Conditions (NESARC). It asked participants about their marijuana use and BMI, once between 2001 and 2002 and again between 2004 and 2005. The study found that by the second assessment, both pot smokers and non-pot smokers saw increases in their BMI. However, these changes were less pronounced in those who used cannabis.

These results are supported by earlier data from the Coronary Artery Risk Development in Young People Survey (CARDIA) conducted in 2006. Throughout the 15-year duration of this longitudinal study, marijuana users were found to consume more calories than non-users, but without significantly increasing their average BMI.

Furthermore, a 2018 review found that, across all studies on weed and BMI, pot smokers tended to have a lower BMI than their non-pot smoking counterparts, with an average BMI of 26 kg/m² compared with 27.5 kg/m² (for reference, a BMI of 18.5–25 kg/m² is considered healthy).

These surprising results have had scientists baffled for years. How can something which promotes increased calorie intake cause reductions in BMI over time?

Why Pot Smokers Are Skinnier than Non-Pot Smokers

There are several theories as to why cannabis use may slow down weight gain in the long term. One such theory is that pot smokers are more likely to use other drugs, something which could lead to a lower BMI depending on the substances and degree to which they are used. It has also been suggested that there is some competition between drugs such as marijuana and food at reward sites in the brain.

However, what seems far more likely is that weed slows down weight gain due to the way THC interacts with the endocannabinoid system. It is thought that, while short-term cannabis use increases appetite and calorie consumption, prolonged use could lead to downregulation of CB1 receptors in the brain, meaning that it makes them less sensitive to endocannabinoids.

As we already know, endocannabinoids stimulate your appetite. They promote increased calorie consumption as well as slowing down your metabolic rate, encouraging energy to be stored in fat cells throughout the body. These effects are mimicked by THC, which is why a particularly potent marijuana strain is likely to trigger an attack of the munchies.

It is possible that THC interacts with the endocannabinoid system to promote metabolic regulation, explaining why weed only causes weight gain in people who are underweight anyway. It sounds too good to be true. So, could cannabis help in the battle against obesity? Let’s take a look.

Could Cannabis Help in the Obesity Epidemic?

It is no secret that many developed countries have a massive problem with obesity. Adult obesity has increased three-fold in America since the 1960s, and the problem is growing all the time. This is a major issue, since not only does obesity cause discomfort and disability but it also places considerable strain on the healthcare system.

Obesity is closely linked with increased inflammation and a whole host of other serious conditions including heart disease, diabetes, depression, Alzheimer’s disease, cancer, and musculoskeletal diseases such as arthritis. In fact, obesity and its related diseases are one of the leading preventable causes of death in the developed world.

While it is far-fetched to imagine that cannabis could solve this issue on its own, it is possible that it could help. According to research, there is a 2–6% lower probability of being obese if you live in a marijuana-legalized state. This is possibly down to a combination of factors including a reduction in alcohol consumption among young people and increased mobility in older generations who may experience relief from chronic pain.

There are several possible reasons why pot smokers may be slimmer than non-pot smokers including increased metabolic rate, decreased alcohol use, and improved mobility. Although we still do not fully understand the mechanisms involved, we are getting closer all the time. Whatever the reason, it seems that pot smokers do tend to be skinnier than non-pot smokers, no matter how strange that may seem.

So, does the current research mean that as long as you smoke weed, you can eat whatever you want and not gain weight? Sadly not. As long as you consume more calories than you burn off in a day, you are guaranteed to gain weight eventually.

Although marijuana could help to slow the process down, there are limits to its capabilities. You should also bear in mind that even if you are a healthy weight, you could still be affected by other diet-related problems such as high cholesterol which are equally dangerous in the long run.

Therefore, you should try to be mindful of what you eat as well as how much (most of the time, at least). Fortunately, there are plenty of healthy alternatives to chips and cookies when it comes to the munchies, so you can still enjoy your enhanced appetite without worrying too much about your weight.

The Best Marijuana Drinks to Try in 2021

Are marijuana-infused drinks really the next big thing?