As more states move to legalize cannabis, more people are gravitating toward weed. Whether they use it for medical or recreational purposes, more and more people are finding room in their hearts for this fascinating plant.

States with legal cannabis usually have regulated dispensaries. In theory, these ‘cannabis stores’ offer a safer alternative to the black market, with regulated prices and more reliable products. But are the products really safer?

There have been some reports of cannabis samples from dispensaries containing pesticides, herbicides, and all sorts of gross stuff. It’s seriously concerning because it means that consumers begin to doubt the ‘regulation’ that’s supposedly in place. What’s the point in legalization if no safeguarding is put in place?

For many, the presence of pesticides in weed is an enormous concern. Many people assume that pesticides are dangerous for human consumption and may be toxic; in this article, we find out if there’s any truth to this claim.

Read on to find out what you can do about pesticides in your weed.

Are There Really Pesticides in Weed?

Just like many other plants, cannabis can attract animals. The psychoactive component of the plant, THC, may have evolved as a predator deterrent. After all, any herbivore that accidentally munches on some marijuana is sure to steer clear in the future after experiencing a dizzying, unexpected high!

However, cannabis is still attractive to insects. Although there are natural methods for keeping cannabis grows insect-free, it’s all too easy for cultivators to use insecticides. Even though insecticide use is banned in many localities where ingestible products are concerned, some cultivators sneakily use pesticides on cannabis. 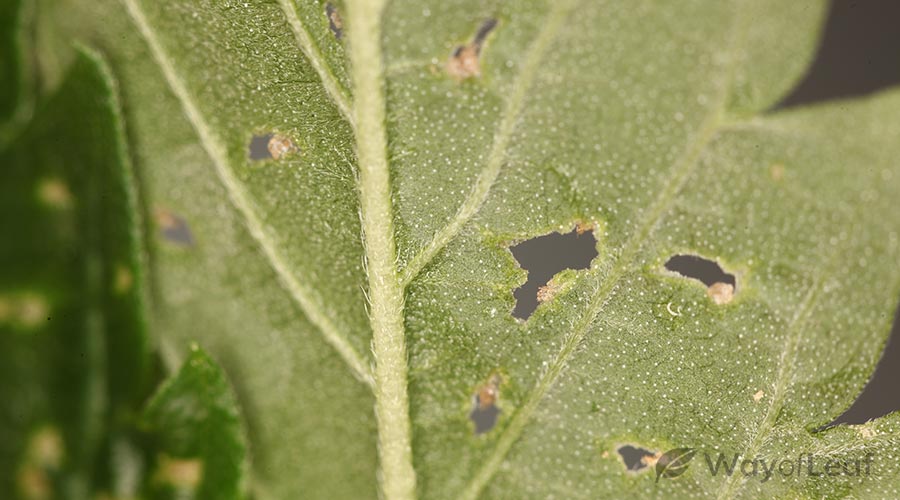 There are always conspiracy theories, especially in the marijuana world. It’s all too easy for anti-cannabis protesters to spread rumors about pesticides in weed to put everyone off. That said, there have been accurate reports of pesticide-laced marijuana.

In Canada, a report confirmed that several samples of cannabis contained banned pesticides. Health Canada even backed up these claims, revealing that the samples contained bifenazate and myclobutanil. While the latter is allowed in small quantities, it is never allowed on combustible products – i.e., cannabis. When heated, myclobutanil becomes more toxic than cyanide.

Several Canadian provinces hastily issued recalls on cannabis products after this revelation. But recalls just don’t cut it – these products shouldn’t be out there in the first place. Sadly, the pressure to produce more cannabis means that inexperienced growers are entering the industry, and regulators aren’t conducting the right tests.

While Washington’s Liquor and Cannabis Board is testing for mold, fungi, and bugs, it isn’t currently testing for residual pesticides. It’s the same story in many other states.

What Pesticides Are Commonly Used on Cannabis?

Not all pesticides are harmful to our health. Some are okay to ingest in small quantities, even though it should be avoided where possible.

Unfortunately, the cannabis industry uses a lot of illegal pesticides. The list includes:

The final pesticide on this list, azadirachtin, is often marketed as safe because it is derived from neem oil. However, there have been suggestions that this pesticide is making people sick when they consume cannabis.

The Dangers of Pesticides

Most people use cannabis by smoking it or ingesting it orally. Smoking is the traditional method, but if there are pesticides in your weed, you’re giving them direct access to the respiratory system. From there, pesticides can enter your bloodstream and eventually reach your cells and tissues.

Some people believe that pesticides are causing cannabinoid hyperemesis syndrome (CHS). This syndrome is an unpleasant experience that occurs after you use cannabis. The symptoms include nausea and vomiting and abdominal pain. There may even be a link between CHS and azadirachtin.

At present, there is not enough research to link CHS and pesticides, but it’s a prominent theory. After all, a study in the Journal of Toxicology, titled Determination of Pesticide Residues in Cannabis Smoke, has suggested that cannabis users are potentially exposed to extremely high levels of pesticide residue, reaching up to 69.5%.

The fact that several pesticides are banned in food agriculture should be enough to tell you that pesticides are dangerous to consume. Where possible, it’s vital to avoid pesticide-riddled weed. But how is this possible?

Below, we cover some essential tips for both growers and buyers when it comes to avoiding pesticides in weed.

Thankfully, chemical pesticides are not the only option for weed growers. There are some natural alternatives to pesticides, and some growing techniques that ensure your weed is pesticide-free.

It’s always easier to manage pests in a controlled environment. Indoor growing operations, such as greenhouses, allow you to better keep an eye on the situation. If you’re going for an eco-friendly grow, then you’ll have to watch out for energy consumption! Still, greenhouses are the best option for controlling pests.

Be aware, however, that if pests do break into your greenhouse, then the entire crop is more likely to be wiped out.

Neem oil is perhaps the most popular natural insecticide for weed. Oil is extracted from the seeds of the neem plant, and it can easily be sprayed onto your crop whenever necessary. Neem oil is very useful, combatting insects, fungi, and mold. Growers say that it works against aphids, grasshoppers, caterpillars, spider mites, and more!

Surprisingly, garlic and pepper can also be used as a significant deterrent. You can make this natural pesticide at home quite easily, making it a cheap option, too. The strong smell deters bugs, and the capsaicin in peppers makes the plants taste bad for insects. The more capsaicin, the more effective it is, so go for a hot pepper.

All you need to do is dice the peppers and garlic (about 250g of each) and add to a blender with one liter of water. Spray the mixture onto one leaf, then wait for 24 hours. If the mixture is too strong, it may damage the plant, which ruins the point entirely. Once you know it is safe, you can cover your crop.

It’s best to spray the plants at night time, as this is when insects will be preying.

Contrary to popular belief, not all insects are harmful to your crop. Introducing beneficial insects to your garden ensures that the nasty bugs will be gone, and your crop will be protected. Beneficial creepy-crawlies include ladybugs, pirate bugs, and green lacewings. Think of it as having your own ladybug bouncer!

Buying Tips: Make Sure Your Weed Is Always Pesticide-Free

For growers, it can be tricky buying pesticide-free cannabis. It’s pretty much impossible to know whether cannabis doesn’t contain any pesticides unless it is lab tested, and many companies are not yet providing tests for pesticides. Hopefully, we will see a change in the future.

Advice from the experts is to demand transparency. If you don’t ask, you don’t get! As a consumer, you are free to make demands, and growing cries for pesticide-free weed will motivate the producers to be more transparent. By being vocal, we can inspire a better future in cannabis.

For now, you can stick with growers that do provide lab reports. Always buy from growers you trust.

In some medically legal states, consumers can also grow their own weed; if pesticide use is a huge concern to you, grow your own cannabis – completely free of pesticides. You should only do this if it is legal to do so in your state, and acquire the right documentation where necessary.

Final Thoughts on Pesticides in Weed

It’s worrying that some studies have found pesticides in weed. More worrying is the use of banned substances. Although legalization is a step forward for cannabis enthusiasts, pesticide use is not something that users should accept.

Thankfully, there are some growers who use organic practices. The only way to tell whether their claims of organic growing are true is to see lab reports, so it’s crucial that consumers demand transparency moving forward.

It’s good to know that there are natural alternatives, and hopefully, there will be more pesticide-free cannabis available in the future.