New Study Finds Most Cannabis is Too Strong for Medical Use

If you are a recreational marijuana user, the enormous array of ultra-potent strains available is fantastic news. These days, it is normal to find top-shelf cannabis with a THC content of over 20%. Indeed, even mid-grade herb is getting to that level. It is a long way from a generation ago where cannabis seldom had a THC percentage in the double digits.

As much fun as it is to get completely stoned, evidence suggests that extremely high THC levels are unnecessary for MMJ users. In fact, it could increase the risk of conditions such as anxiety and paranoia. There is also a possibility that extremely strong weed may produce a frightening experience for a novice.

A new study by Cash et al., published in PLOS One in March 2020, confirmed what many people think. Namely, medical marijuana is far more potent than what patients need. An estimated three million people in the United States alone use MMJ. California accounts for almost one million!

That’s a LOT of people who routinely use powerful cannabis! In this article, we:

Researchers at the Wake Forest Baptist Medical Center were responsible for the latest study. Its headline finding was that an incredible 90% of legal weed products found in medical dispensaries are too potent. Modern cannabis contains more THC than is necessary to combat chronic pain.

The study involved recording the concentrations of THC and CBD in plant cannabis products from legitimate dispensary websites. Next, the team compared them within nine legal states, including California and Colorado. It was a wide-ranging study encompassing over 8,500 products in more than 650 dispensaries.

The vast majority of products offered in medical dispensaries contained more than 15% THC. In many cases, these high-THC products had low rates of CBD. This is important because more elevated amounts of cannabidiol can counteract some of the intoxicating effects of THC.

THC has a high binding affinity with CB1 receptors, primarily found in the brain and CNS. This is one of the reasons why the compound helps produce an intoxicating high. CBD is non-intoxicating and works with the CB1 and CB2 receptors. When you combine the two cannabinoids, your body benefits from the entourage effect.

High levels of THC alone can cause stress and anxiety. Add in CBD to the mix, however, and it helps take off the edge. CBD could even improve the apparent analgesic properties of THC. The bottom line is that high-THC, low-CBD strains are likely too intense for many users. They also aren’t strictly necessary.

Strong Cannabis Can Cause More Problems Than It Solves

The assumption is that we need extremely potent marijuana to handle severe pain. A study by Li et al., published in Complementary Therapies in Medicine in October 2019, points in that direction. The researchers analyzed how cannabis impacts momentary pain intensity levels. They based their findings on almost 3,000 MMJ patients who used the Releaf App between June 2016 and October 2018. In all, the patients recorded over 20,500 instances of cannabis administration between them.

The data showed that patients derived the most significant pain relief responses from using high-THC dried cannabis flower. Jacob Miguel Vigil, one of the study’s authors, spoke about the synergistic effect of THC, terpenes, and flavonoids when combined. He also said the results confirm that marijuana use is a “relatively safe and effective medication for alleviating pain.” According to Li, the lead author, approximately 95% of cannabis administrations resulted in symptom relief for different types of pain.

What’s the Problem with Too Much THC?

One can’t make a confident hypothesis based on one study, or even a handful. Also, there is evidence that excessive THC consumption has negative consequences. There are strong links between the use of high-THC cannabis and an increase in psychotic disorders.

A study by Forti et al., published in The Lancet in May 2019, looked at the incidence of psychotic disorder across Europe. Its main findings were as follows:

Researchers compared over 2,000 people in 11 European locations and one site in Brazil between 2010 and 2015. Of these patients, 901 had at least one episode of psychosis. According to Forti, the findings were consistent with other studies that linked high-THC weed with adverse mental health effects.

The above is one of many instances where a research team noted a potential increase in psychosis with potent THC consumption. It is important to note that the issue primarily affects those predisposed to such conditions.

In any case, it seems as if THC has very different effects on the body at high and low doses. For instance, a small dose of cannabis could positively impact anxiety. In contrast, a higher concentration could induce anxiety and possibly lead to increased paranoia. Low doses of THC could increase blood flow. However, a high level of THC may decrease blood flow through the vessels.

THC Content – How Much is ‘Enough’ for Pain Relief?

According to the Cash study, a lot less than what’s currently available!

As you can see, at least 70% of all products sold in all nine states contained 15%+ THC. Colorado has the most potent cannabis, on average. Over 91% of items provided at least 15% THC. 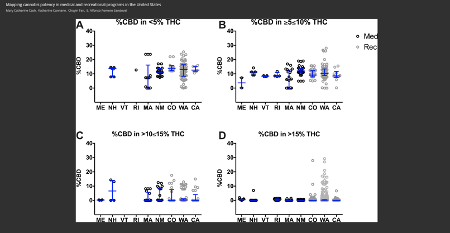 Moreover, practically none of the 15%+ THC products contained more than a token amount of CBD. According to the researchers, a THC content of less than 10% is sufficient for the treatment of pain.

The study by Ware et al., published in the Canadian Medical Association Journal (CMAJ) in October 2010, is one such example. The researchers found that three puffs of cannabis a day helped patients with chronic nerve pain due to surgery or injury. The herb also enabled users to sleep better.

It was a clinical trial where the team compared a placebo with three varying doses of marijuana. It was a relatively small study, with 21 volunteers who had an average age of 45. What was fascinating was that the three treatments contained 2.5%, 6%, and 9.4% THC. Although the highest concentration was the most effective, it is still far below what you’ll find in the average dispensary.

A study by Portenoy et al., published in the Journal of Pain in May 2012, had a similar outcome. The study involved over 260 cancer patients getting treated with opioids. They received three dose strengths and a placebo. The combined THC and CBD doses were 21mg, 52mg, and 83mg per day. The group that used the lowest dose reported the most significant improvements in pain levels.

It is also interesting to note that the highest dose group didn’t enjoy better pain relief than those who used the placebo. They also experienced the most side effects.

How Did Marijuana Become So Potent?

Those who remember the days of Woodstock certainly enjoyed their marijuana. However, it contained a fraction of the THC that’s available today. It was primarily down to the fact that weed was often filled with seeds and stems. High-THC cannabis existed; it was just incredibly hard to find.

Therefore, it is a combination of advanced breeding techniques and easier availability of cannabis that’s causing high-THC strains. There are now marijuana strains available with an apparent THC content of 30%! You can also find concentrates with 90%+ THC, and finding 70%+ THC is easy.

Experts in weed know you can tell a lot about it from how it looks. If you check out past issues of High Times, for example, you will see the differences between old-school product and today’s good s**t. Look closely at images of cannabis from the 1970s, and you will notice a lack of trichomes. Indeed, many buds from the era were brown, stringy, and pathetic-looking compared to today’s behemoths.

As we mentioned, legalization has changed everything. These days, breeders are free to grow what they like. It so happens that sinsemilla is what they want. Sinsemilla cannabis has a high concentration of intoxicating cannabinoids and no seeds. You get it from the flowering tops of female plants that aren’t fertilized. This part of the plant has the highest THC content. Trimmers also remove large leaves with lower THC levels.

Other Reasons for Potent Weed

Here are some other reasons why the potency of marijuana has increased so much in recent years:

The Rise of Super-Strength Cannabis

As we mentioned earlier, it is arguably the increase in THC to CBD ratio that is most concerning. If you use a strain with 22% THC and 5% CBD, for example, there is potentially enough cannabidiol to modulate the effects of THC. A prime example is CBD’s capacity to reduce the negative effects of THC, such as psychosis and paranoia. Indeed, many researchers view CBD as an antipsychotic medication with fewer side effects than existing drugs.

Final Thoughts on Potent Marijuana for Medical Use

There is no doubt that we have easier access to marijuana that’s more potent than ever before. It is a myriad of factors that have caused this revolution in weed cultivation, production, and extraction. From removing prohibition in some areas to consumer demand, high-THC cannabis is all the rage.

That this is the case is hardly a surprise, especially for those living in a capitalist society. In such locations, a constant demand for ‘more’ is a way of life. Larger portions of fast food, stronger alcohol, speedier service, and easier shopping, are prime examples. We’re not content to have ‘just enough.’ Instead, we push the envelope of excess until we finally reach a breaking point.

The concept of ‘less is more’ is not one that goes down well in the Western world. Sadly, it seems as if cannabis is hurtling down the same route. Research to date suggests that lower THC contents trump intense strains for chronic pain relief. Marijuana with a mixture of CBD and THC also seems to work well. It can provide you with the effects that you need while staving off adverse side effects.

Aside from selling lower THC strains, dispensaries should consider boosting the THC to CBD ratio in the latter cannabinoid’s favor. If you are using MMJ, there is no need to get completely stoned. Indeed, microdosing is likely more efficacious. At present, dispensaries are selling ‘recreational’ marijuana rather than ‘medical’ herb. It is time for us to take a step back and begin a process of lowering THC content. It is entirely possible that a little cannabis can go a long way.

214
10 min read
Video
Approved
Ask our experts a question
Related
Trending
We use cookies to ensure the best user experience. If you continue to use this site we assume that you are happy with it.