Things are changing quickly in terms of marijuana laws. Nowadays, a majority of the American population favors cannabis legalization. Amazingly, an increasing number of baby boomers are smoking pot. Thanks to states with lax cannabis laws, weed is accessible and legal to millions of people who want or need it.

However, not all states are the same. Perhaps lawmakers are more worried about the side effects of weed rather than its potential health benefits. Or maybe legislators are buying into the lies spread by anti-cannabis campaigners.

Whatever the reasons are, there are some states and countries where the weed laws are shockingly strict. You can expect fines, arrests, and even jail time if caught in certain locations with harsh marijuana laws.

There are countless women and men spending decades in prison for a cannabis conviction.

There are countless women and men spending decades in prison for a cannabis conviction. We’re not talking about drug traffickers. These are individuals misfortunate enough to get caught with a few grams of marijuana in their possession. Meanwhile, rapists, murderers, and fraudsters walk free due to procedural errors. More laughably, some are convicted and receive shorter prison sentences than someone found with a gram of cannabis!

The Clemency Report claims that over 50 people have received a life sentence from a federal judge for a cannabis crime since 1996. In this article, we check out some of the most draconian punishments meted out for a marijuana offense. Many countries make southern states look lenient in comparison!

A British man was jailed for four years in Dubai in September 2007. Police arrested Keith Brown at the Dubai International Airport. Customs officials found a crumb of weed on the side of Brown’s shoes. Brown, a youth development officer in the UK and a father of three at that time, was transferring flights from Ethiopia to London.

According to reports, the fragment of weed weighed only 0.003 grams. The tiny particle of weed was invisible to the naked eye. However, it was enough to violate the strict drug policy of the United Arab Emirates.

The Dubai customs officials use highly sensitive equipment to conduct exceptionally thorough searches on travelers. If they find any amount of weed, no matter how small, it is enough to receive a four-year prison term.

Patricia Spottedcrow knew she was breaking the law by selling cannabis. However, the single mother from Oklahoma had no clue that selling $31 worth of marijuana would utterly destroy her life. Spottedcrow had the misfortune to make the sale to a police informant in 2011.

It seems as if the judge wanted to make an example of her and stunned the state by passing down a 12-year prison sentence. The case became national news, and criminal justice reform advocates got involved. Eventually, Spottedcrow was released from prison after two years, though she only saw her kids twice in that time.

Sadly, her problems were far from over. In 2019, she was jailed again. This time, for a failure to pay over $3,500 in court fees. Thankfully, news of her latest ordeal reached social media, and strangers donated the cash to cover the fee.

3. How One Joint Became a Death Sentence for a Paralyzed User

On the face of it, a 10-day prison sentence for possession of a joint and a loaded gun seems almost lenient. However, for Jonathan Magbie, the incident didn’t ruin his life; it ended it. Magbie was paralyzed from the neck down from the age of four after being hit by a drunk driver. 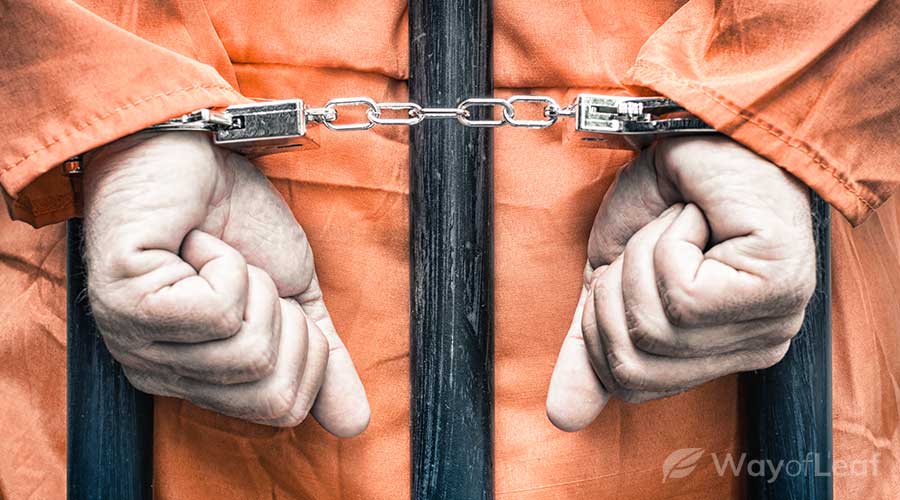 In 2004, Washington, D.C. police found a joint, which Magbie used as MMJ, and a loaded gun. They searched a car in which Magbie was a passenger. Even though he needed medical assistance 20 hours a day and had no previous convictions, he received a 10-day prison term. Tragically, without a ventilator to help his breathing, he died four days into his sentence.

4. Growing Cannabis Plants for Medical Use = Life in Prison

In 2011, police arrested 75-year-old Lee Carroll Brooker. The disabled veteran was ‘guilty’ of growing three dozen cannabis plants for medical use. He suffered from chronic pain and grew the plants behind his son’s house, where he lived in Dothan, Alabama. Mr. Brooker received a life sentence without the possibility of parole!

Unfortunately, Brooker paid the price for a previous misdeed. Decades earlier, he had been convicted of armed robbery in Florida and served 10 years. Alabama law states that anyone with certain prior felony convictions is sentenced to life without parole when convicted of a specific cannabis crime.

It happens when a person is found in possession of more than one kilogram, or 2.2 pounds, of weed, regardless of intent to sell. The weed plants collected at his son’s house, including unusable parts like stalks and vines, weighed 2.8 pounds.

It is crazy that life without parole is a mandatory sentence for cultivating marijuana. Besides Alabama, only Louisiana, Mississippi, and South Dakota have such laws.

In Mississippi, possession of barely an ounce of weed is enough to trigger a mandatory life sentence for someone with prior convictions for certain felonies. The state recently voted in favor of an MMJ program. We wait with interest to see if Mississippi’s stance towards cannabis crimes gets softer as a result.

As crazy as it sounds, it’s true. Possession of drugs is a major offense in Malaysia. However, it is making steps towards being the first country in Asia to legalize medical marijuana. Even so, its existing marijuana laws are incredibly harsh.

You can get at least five years in jail for possession of over 50 grams of cannabis. You also receive a fine of more than 4 lakh Rupees, which is equivalent to 6,500 USD. Planting a marijuana seed can land you in prison for life. Even more shocking, getting caught in possession of 200 grams may result in a mandatory death penalty.

You are presumed to be trafficking the drug in this situation and are therefore subject to the ultimate penalty. Over 900 people are currently on death row in Malaysia, and 700 are thought to be for drug-related offenses. According to an online petition, over 50 of these individuals are there for marijuana trafficking.

In 2009, 25-year-old Shahrul Izani Suparman received a death sentence. He had 622 grams of cannabis in his possession when the police found him. As he had the intent to supply, Malaysian law ensured he received capital punishment.

He was only 19 when arrested and had spent six years in jail fighting charges before being sentenced. Fortunately, he was spared the noose when he received a pardon in 2017. Suparman was one of the lucky ones. Mohd Radi Abdul Majid and Mustaffa Kamal Abdul Aziz didn’t have the same good fortune. Both men were executed in Malaysia in 1996 for selling 1.2 kilograms of cannabis.

Unfortunately, the above is just the tip of the iceberg. Eight countries, including the United States, have death penalties for the trafficking of marijuana. Admittedly, America has never actually imposed it. Nonetheless, there are several states with crazy laws that can see people spend decades behind bars for non-violent offenses. You can even spend years in jail for possession.

There are several states with crazy laws that can see people spend decades behind bars for non-violent offenses.

Overseas, there are even harsher punishments meted out. It is incredible that we continue to follow this path for something that grows naturally. Meanwhile, synthetic drugs kill tens of thousands of people a year. These are perfectly legal in most countries. This is sadly the world we live in.

Related article
Can You Get Arrested for Being High? [We Spoke with a Lawyer]

1
5 min read
Join the discussion
TOC
Premium
Your subscription has ended
If you love cannabis and appreciate our content, join WayofLeaf Premium today and receive:
Best of all, part of your membership fee will go towards helping to legalize cannabis.
Go Wayofleaf Premium
No thanks, I can't afford it
I already have an account
×
Login in to your premium account