How Much the Government Is Making by Keeping Pot Illegal

Marijuana has only been illegal for about 1% of its entire history. Unfortunately, it comprises the last 100 years or so. The American Government, along with many others around the world, continues to resist calls to remove cannabis from the list of controlled substances under the 1970 act.

Why does the U.S. Government insist on keeping weed illegal? Politicians pretend that there is a moral issue at play. This is hard to believe when successive governments allow access to firearms capable of firing hundreds of rounds a minute. Then there is the legalization of deadly opioids, tobacco, and alcohol.

As for ‘listening to the voice of the people,’ forget about it! Recent polls suggest that around two-thirds of Americans are in favor of marijuana legalization.

As you probably know, the real reason for ensuring cannabis remains illegal is ‘dirty cash.’ While predictable, it is not a straightforward situation, as we explain below.

Section 280E is a portion of the American Tax Code introduced in the 1980s. It closed a loophole that enabled narcotics sellers to make claims related to their illegal businesses on their tax returns. Examples included travel costs and scales! Marijuana was affected by 280E because it is a Schedule I drug. As a result, marijuana businesses can’t write off business expenses, even in states where weed is legal.

As a consequence, the IRS saves an estimated $500 million a year on those tax write-offs. According to one dispensary owner in Colorado, it is frustrating to learn that weed sellers are treated like drug dealers. He pointed out that the industry brought over $500 million in revenue to his state. The state government used the money to build schools, among other things. Section 280E is effectively a ‘double tax.’

Is it probable that the Federal Government makes more money than we think from 280E? According to Matt Karnes of GreenWave Advisors, the government earned $8 billion from state-legal weed businesses between 2012 and 2017.

One of the most puzzling aspects of the entire circus is the fact that the government is losing money. It appears this way on the surface, at least. According to an economist named Jeffrey Miron of Harvard University, the continued prohibition on weed costs are high. State and federal governments lose as much as $20 billion a year. That’s anywhere between 15 and 40 times the amount saved because of Section 280E.

A national weed tax could generate around $9 billion for the government.

Miron found that a national weed tax could generate around $9 billion. We could save another $9 billion or so on law enforcement costs. These figures are from 2010! There are thousands of misdemeanor marijuana possession cases pending in states where the plant is still illegal. Court proceedings cost states millions of dollars a year. In 2011, there was a marijuana-related arrest every 42 seconds. Most ‘crimes’ were little more than possession of a small amount of weed.

So, there seems to be no sensible financial reason to ban weed, right? Wrong! The government does make money. More pertinently, individual politicians appear to profit handsomely from their opposition to marijuana. It begins to make a lot of sense when you consider the industries that would suffer from the legalization of cannabis. 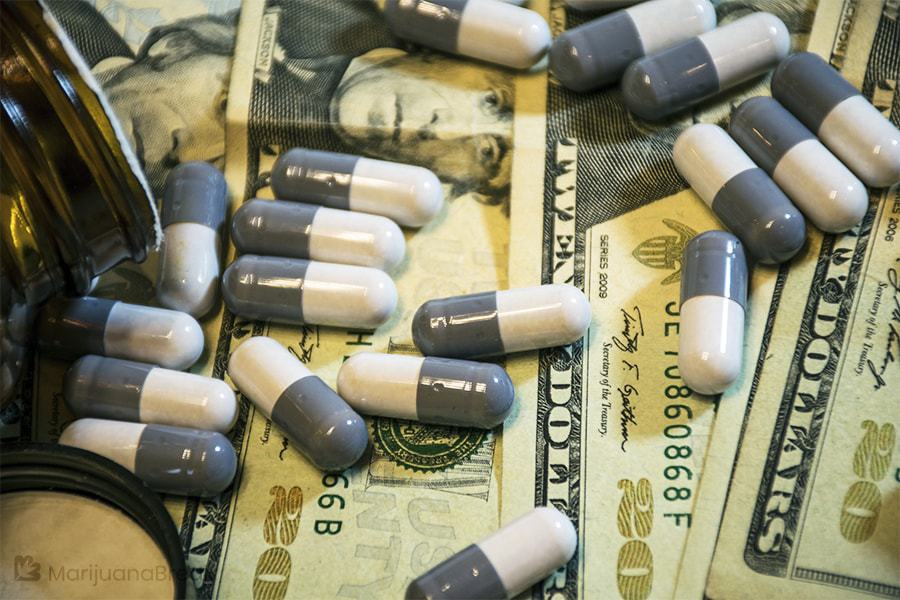 You won’t be shocked to learn that two of the most fearful words in the English lexicon is involved. Pharmaceutical companies routinely pump big money into lobbying against weed. During the vote to legalize marijuana in Arizona, Proposition 205, Insys Therapeutics donated $500,000 to the anti-legalization cause. Insys manufactures a drug called Subsys, which is up to 100 times more potent than morphine. Legalizing weed would hurt product sales and cost the company tens of millions of dollars.

Data from research shows their fears are founded. In states where weed is medicinally legal, opiate overdoses fell 25% compared to states where cannabis is illegal. Good news for Americans, bad news for Big Pharma as it also means sales are down. Research also shows that Medicare would save almost $500 million a year if weed were legal on a federal level. Once again, it is the pharmaceutical companies that would lose out.

Drug manufacturers always donate big in elections. In the 2012 elections, for example, they gave almost $22 million to various federal candidates and committees. Too many of the nation’s representatives’ parrot anti-marijuana rhetoric based on dubious science, half-truths, and outright lies. The Federal Government’s coffers are probably not boosted by Big Pharma to any significant degree. However, it seems as if several officials profit handsomely. 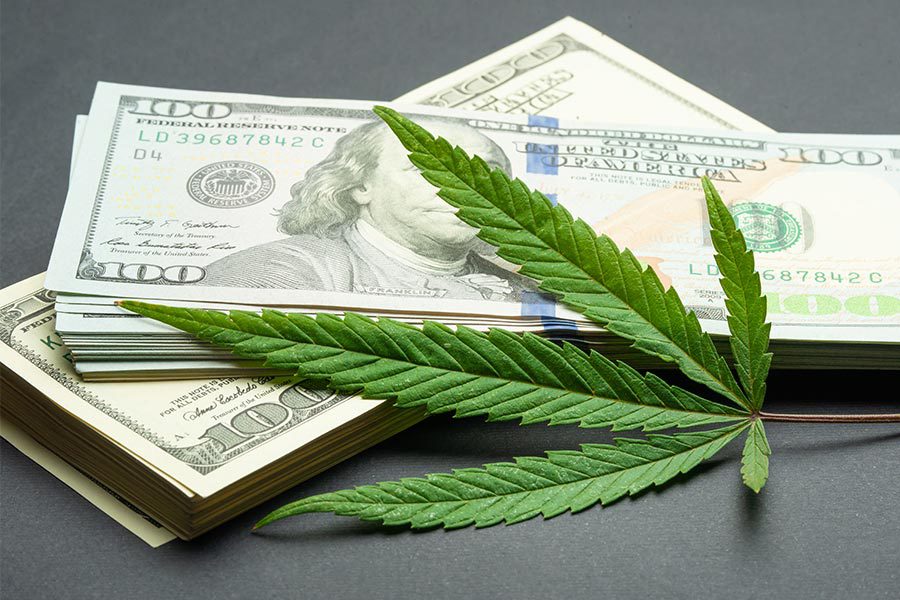 These two ‘legal’ drugs would face unwanted opposition in a world of legal cannabis. Oddly enough, preliminary data from Colorado showed that alcohol sales increased in the immediate aftermath of legalization. Marijuana is recreationally legal in that state. As a result, the alcohol industry in Nevada backed legalization while the industry in Massachusetts and Arizona fought against it.

Since 2009, the Beer, Wine, and Liquor industry have spent almost $20 million a year on lobbying efforts. The majority of their efforts relate to alcohol regulations and taxes. However, you can expect that figure to increase. Weed likely remains a long-term threat to the alcohol industry.

A report by International Wine and Spirits Research (ISWR) painted a grim picture. Released in February 2019, the report claimed that up to 40% of people aged 21+ now use marijuana in legal states. ISWR believes that weed use will increase as acceptance of it expands.

Big Tobacco also sees the threat. However, the industry is adopting an ‘if you can’t beat them, join them” attitude. Companies such as Phillip Morris showed an interest in the marijuana sector back in 1970, just before it became federally illegal. The brand invested $20 million in an Israeli medical marijuana company in 2016.

The maker of cigarettes such as Marlboro, Altria, purchased half of Cronos Group, a weed company, for $1. 8 billion in 2018. While some Big Tobacco firms fight against marijuana, most are jumping on the bandwagon. Ironically, it is their influence that could ultimately lead to the legalization of cannabis, if there is enough money involved.

Police forces around the country benefit from federal funding in the war on drugs. Law enforcement agencies collected almost $1 billion from weed arrests between 2002 and 2012. Federal grant programs such as the Byrne grants, provide further financial assistance to the police in their drug enforcement efforts. The Byrne grants offer over $2.4 billion a year, for example.

The private prison system would also suffer a substantial financial hit in the event of marijuana legalization.

They make money from ensuring their jails are full. A significant percentage of their inmates are inside for minor weed crimes. GEO is one of the most successful private prison groups in the United States. In its 2012 annual report, the firm announced an occupancy rate of almost 96%. GEO alone spends around $600,000 a year lobbying against the legalization of cannabis.

There is a vast difference between how we run public and private prisons in this country. A public prison is all about housing offenders to punish, and possibly, rehabilitate them. A private jail revolves around profiteering. These institutions receive stipends from the government. The more prisoners they house, the more money they get.

Private companies do whatever they can to cut corners and save money. If this means lower standards of hygiene and safety for the inmates, so be it. The public doesn’t care much for the plight of the jailbird.

Incredibly, the number of marijuana arrests increased in 2018, despite more states legalizing the herb. FBI data showed a total of over 663,000 cannabis arrests. This figure is an increase of over 3,500 on the 2017 figure. Private prisons are raking in the cash, and have no reason to want the legalization of weed.

In a ‘black and white’ sense, the Federal Government loses money by ensuring marijuana remains illegal. “They are looking after our best interests!” you exclaim. However, the entire situation is nuanced in the extreme. Sure, the government possibly loses up to $20 billion a year and regains 5-10% of it due to Section 280E. However, there is a lot more to the situation than meets the eye.

Marijuana legalization would impact several industries such as alcohol, tobacco, private prisons, and Big Pharma. As a result, they lobby the government to keep cannabis in its place. Lobbying is often described as the process of ‘buying the government.’ It is now part and parcel of the American political spectrum. By 2011, there were almost 13,000 Political Action Committees (PACS), and they spent $3.5 billion on lobbying that year.

The real answer to the title question is: ‘We don’t know.’ While the IRS saves some money, the Federal Government loses much more in potential weed taxation. However, the sheer amount of money ‘donated’ to political causes is impossible to calculate due to a lack of records. Money from legal marijuana taxation could help the country in so many ways. Cash from lobbyists does not find such a worthy home.

The future of the cannabis industry

Why we love "Shotgun Willie"

4
7 min read
Join the discussion
TOC
Premium
Your subscription has ended
If you love cannabis and want to support our site, join WayofLeaf Premium today and unlock
Best of all, part of your membership fee will go towards supporting the fight to legalize cannabis.
Sign Up for WoL Premium
Not now
I already have an account
×
Log in to Your Premium Account