At the time of writing, marijuana is technically illegal in Mexico. However, the nation’s Supreme Court made a crucial decision on October 31, 2018. It ruled that prohibiting the use of the herb in Mexico is unconstitutional. The ruling essentially made the existing anti-marijuana law unenforceable. Also, the Mexican government had to act to formally legalize weed within 90 days.

Cannabis has been illegal in Mexico since 1920. The nation didn’t decriminalize possession of small amounts until 2009. Since then, there was a growing appetite for the legalization of marijuana. In 2015, the Mexican Supreme Court ruled that four individuals from a particular organization were allowed to grow and use weed. In June 2017, President Enrique Pena Nieto signed a limited MMJ Bill. It permitted the use of cannabis products with less than 1% THC.

Just over a year later, and another Supreme Court decision changed everything. Though the law prohibiting cannabis remains in place, it is impossible to enforce. Those who are arrested for a marijuana-crime can cite the ruling and demand that the charges are dropped.

Those following the legalization of recreational cannabis in various American states know that it isn’t straightforward. The 90-day mandate was never realistic. At present, Mexico has yet to allow adult-use marijuana, but it is inevitable. Soon, a nation of over 128 million people will permit recreational cannabis. When it happens, it is going to have an enormous effect on the industry. We investigate the likely repercussions in this article. First, let’s look at what is happening on a legislative level.

Legalization Is Coming After the Usual Roadblocks Are Removed

When the Supreme Court made its ruling on Halloween 2018, it was the fifth time it issued such a decree. This is extremely important because in Mexico when its highest court reaches five similar verdicts on any issue, it becomes the nation’s standard. Therefore, the Supreme Court legalized adult-use cannabis in Mexico.

Of course, this isn’t much of a help when there is no framework for buying or selling weed. Also, the Court only decides what is and isn’t lawful; it doesn’t actually change the existing law. Lawmakers in Mexico had a year to rework legislation to create an adult-use marijuana market.

As is the case with lawmakers around the world, it seems, the ones in Mexico waited and waited. They finally came up with something in October 2019, a couple of weeks before the deadline! Here are a few relevant points:

There are also calls to impose a 12% sales tax. The funds would help pay for treatment efforts for cannabis abuse.

Shockingly, There Are Delays!

Those of you familiar with how medical and recreational programs are handled in America will doubtless show zero surprise. Implementing legislation relating to cannabis is often as tricky as threading the eye of a needle blindfolded. It initially seemed as if this bill would become law by November 1, 2019.

However, big businesses that want to dominate the Mexican cannabis industry put pressure on lawmakers to stall discussions. The nation’s Senate appealed to the Supreme Court for an extension, and the Court granted it. At that time, the Senate pushed the deadline back, with the Supreme Court claiming it was a ‘one-time’ exemption. Lawmakers expected everything to get wrapped up by then.

Alas, nothing is ever as it seems in the halls of power. It was apparent that further delays were possible. Those who opposed certain aspects of the bill demanded changes. However, it seemed as if everything was sorted out by March 2020. At that time, three Senate commissions passed legislation to legalize all forms of weed.

The next steps involved going to the full Senate. If the new law were approved there, it would go to the lower legislative chamber. At the time, the feeling was that the measure would, after a few changes, attain approval.

Then, the COVID-19 virus came and caused chaos. Towards the end of March, the Mexican Senate agreed to postpone most legislative activity. As a result, a further extension was inevitable, and on April 17, the Supreme Court extended the deadline to December 15, 2020. Whether it is possible to proceed amid the Coronavirus remains to be seen.

The wheels are in motion, however, and the potential impact of marijuana legalization in Mexico is truly enormous.

How Will Legal Cannabis in Mexico Impact the Industry?

It is a potential game-changer. At present, there are only two countries in the world that permit adult-use cannabis; Uruguay and Canada. The former’s population is 3.45 million; the latter’s is approximately 37.6 million. At a stroke, the world’s adult-use market will quadruple once Mexico gets involved. 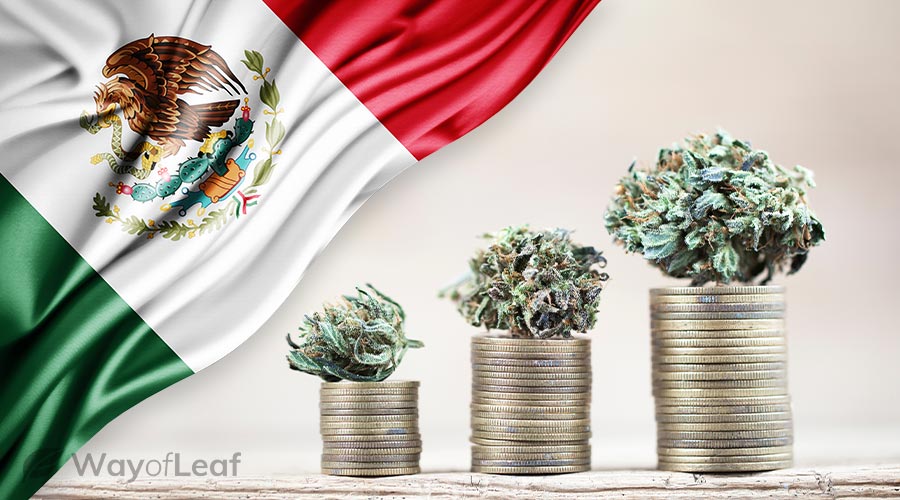 According to The Motley Fool, legal weed in Mexico would cause the global market to grow to around $104 billion by 2024. This is an increase of over 850% on today’s figures! Mexico can expect to earn $1.2 billion in tax revenue per annum and save $200 million in law enforcement costs. Of course, we must consider other factors, apart from the economic impact.

At that stage, the United States will be sandwiched between two countries where cannabis is entirely legal. Mexico has a history of using marijuana and shipping it across the border. With full federal approval, it won’t have the same problems as America when it comes to export and import issues.

Demand will be incredible, but U.S. cannabis companies could face extreme difficulties. Remember, the Mexican law ensures that major organizations do not receive preferential licensing treatment. Due to the illegality of weed in the United States on a federal level, its marijuana firms are currently shut out of international markets. Domestically, a lack of access to financial services and other unique weed concerns are other hurdles.

Once Mexico pulls the trigger on its new law, America will share borders with two countries allowed to produce legal cannabis on a wide scale. More importantly, they can export it to other countries that have legalized MMJ. At least 30 nations have legalized medical marijuana in some capacity. Mexican and Canadian (and Uruguayan) companies can send their products to countries like:

Meanwhile, American cannabis firms continue to suffer legal and financial headaches. While it will take years for the Mexican market to settle, there is a massive opportunity for prospective CBD firms. At least, American CBD companies can ship their products internationally.

What About Its Impact on Crime?

This is one of the fascinating aspects of full legalization in Mexico. The authorities remain in a seemingly endless battle with drug cartels. In the first half of 2018, for example, there were 16,000 murders linked to this war. More than 150,000 deaths since 2006 are related to crime in Mexico. There were 28,000 total murders in Mexico in the first ten months of 2018 alone.

The above are frightening and brutal statistics. There is hope that legalizing weed will reduce some of the cartel’s power. According to the former Mexican president, Vicente Fox, cartels will lose 40% of their income if cannabis is legalized in Mexico and the United States. Fox now sits on the board of Khiron Life Sciences, a Canadian marijuana firm looking to enter the Mexican market. Fox claims he knows of former drug dealers in places like Colorado, Vancouver, and Seattle, who went legitimate once the herb became legal in those locations.

Olga Sanchez Cordero was once a judge on the Mexican Supreme Court. She believes that full legalization will help generate revenue and is also a vital public health issue. She thinks it will “cut the chain” of illegal supply.

On the other side, Alejandro Hope, a security expert, doesn’t see a reduction in the rate of violence. He said that homicides in Uruguay, Colorado, and Washington had gone up since legalization. Hope also claimed that relatively few murders in Mexico relate directly to the cannabis trade.

It is also worth noting that weed seizures in Mexico have collapsed. Seizures on the American border are down two-thirds from their highest rate. The government has all but given up on its previous cannabis eradication scheme.

What Will It Do for the Mexican Economy?

Once there is a framework in place, companies can invest heavily in research and development to help the industry grow. According to New Frontier Data, a fully-fledged adult-use market will include at least 1.4 million consumers, and create up to 75,000 jobs. In reality, the customer figure seems extremely low.

In a July 2019 Gallup Poll, 12% of American adults say they regularly use weed. Interestingly, 24% of people who identify as ‘liberal’ use it, compared to 12% of moderates and 4% of conservatives. There are around 87 million adults in Mexico. If they follow America’s rate of use, the Mexican market will have 10 million regular users!

At present, the figures attached to a Mexican cannabis market are all rough estimates. As we said above, the country could earn $1.2 billion in tax money, and save $200 million in policing costs. It would certainly decrease the unemployment rate, which was already falling steadily pre-Coronavirus. In March 2020, only 3.26% of Mexicans were unemployed. At the same time, in the United States, the rate was 3.6%. Of course, the COVID crisis has increased joblessness in many countries since.

Overall, the direct use of marijuana could bring up to $5 billion to the Mexican economy per annum. It would also benefit from a considerable number of ‘cannabis’ tourists coming from the north. It gives people another reason to move south of the border. An estimated one million Americans currently live in Mexico and make up the country’s largest demographics of immigrants.

Most of those who move claim that Mexico is addictive, and they have no desire to return home. With adult-use cannabis widely available soon, one wonders how many more people will go to Mexico, and decide to stay!

It is a question of ‘when’ and not ‘if.’ The Mexican Supreme Court has already made a monumental ruling. You can theoretically buy, possess, and use cannabis in Mexico now. Anyone who gets arrested can cite the court’s decision. That said, it is probably not a good idea to go down south and test that theory!

It seemed likely that the legislation to begin an adult-use market would have occurred in earnest by now. Lawmakers were closer than ever to an agreement. Then, the Coronavirus struck and caused chaos, just as it has around the world. Now, the deadline for legal weed in Mexico is set for December 2020. Though the government lifted its lockdown in May, there were fears that it was too early. As a result, it is hard to imagine that Mexican legislators will be able to approve the cannabis legislation by the end of the year.

When it eventually happens, it will spell bad news for American companies who will face competition from companies backed by their government. It will yield more tax revenue for Mexico, and provide tens of thousands of jobs. There are hopes that it will reduce drug-related violence in Mexico, though the jury remains out on that particular point.