Is Marijuana Still Illegal in the USA? [2021 Update]

Trying to keep up with the ever-shifting legal status of marijuana is challenging. While it is perfectly acceptable in one state, it is completely illegal in a neighboring location. In America, some counties don’t allow cannabis use in states where it is legal!

CBD oil now has a major foothold in the industry, which confuses things further. In this article, we decided to answer “is marijuana still illegal?” as clearly as possible. Whether or not it is permitted depends on the state that you live in. With that in mind, we try to cover as many states in America as possible.

For the record, marijuana is fully legal for adult use in Canada and Uruguay at present. There are dozens of other nations with limited MMJ programs.

Where Is Marijuana Recreationally Legal?

As of 2021, marijuana is recreationally legal in the following states:

If you live in any one of these states or territories, you can go to a certified cannabis dispensary and legally buy the substance. You don’t require an MMJ card, certification, or medical documentation. Instead, you only need to be aged 21+ with an ID to prove it. In general, the maximum amount you’re allowed to buy and possess is one ounce. However, some states allow you to purchase more.

The use of cannabis in all states remains restricted to private locations. Consumption in a public place is against the law.

However, recreational sales have not yet begun in a few of the locations mentioned above. Arizona, Montana, New Jersey, New Mexico, New York, South Dakota, and Virginia only legalized adult-use cannabis recently. Vermont won’t have recreational sales until 2022, despite voting to legalize cannabis in 2018.

It is the same situation in New York and New Mexico. In Virginia, residents probably won’t have the chance to buy cannabis commercially until 2024. In D.C., there is no means to make a purchase even though you can technically possess marijuana.

Also, in South Dakota, there is currently a legal case against legalizing recreational cannabis. There is a strong possibility that adult-use marijuana will NOT be allowed.

The use of cannabis in all states remains restricted to private locations. Consumption in a public place is against the law. When using marijuana recreationally, treat it as you would alcohol. Use it in your own home if possible or at the property of a trusted adult friend. Also, don’t drive after using cannabis, and use it responsibly at all times.

In What States Is Marijuana Medically Legal?

In the locations listed above, you can use cannabis recreationally or for medical purposes. The plant is also legal for medicinal use only in the following states:

Marijuana is also legal in the following United States Territories: Puerto Rico and the U.S. Virgin Islands. To make a purchase, you must first register with the state as an MMJ patient. This typically involves receiving a certification from a licensed physician within that state. Then you apply to the state’s department of health. Eventually, you will receive a Medical Marijuana Patient Identification Card (MMJ Card).

(See our detailed list of the state-by-state processes for obtaining a medical marijuana card here).

Once again, there are several states with legal MMJ, but the program isn’t yet operational. This is the case for states such as Mississippi and South Dakota that legalized medical marijuana in early last year. Depending on the state, it can take up to two years for the program to begin in earnest.

Unless you have a valid MMJ card, you could get arrested in these states for cannabis possession. Make sure you have your card on your person at all times!

What States Have Decriminalized Marijuana Possession?

In some MMJ states, the possession of a small amount of cannabis is decriminalized. The amount varies, though it usually relates to less than an ounce. Check your state’s laws to learn more.

Decriminalization means you only receive a fine rather than a criminal charge. It is treated as a civil infraction and usually carries a small fine. Crucially, the episode doesn’t end up on your permanent record.

Here are the states where marijuana is now decriminalized:

Cannabis is also decriminalized in the U.S. Virgin Islands.

What About CBD — In What States Is CBD Legal?

There are also rules regarding CBD-only legalization, which vary according to each state. Once again, this is because cannabidiol isn’t legal on a federal level. It is a cannabinoid in cannabis and hemp that produces no high. Some marijuana strains are bred specifically to contain high amounts of CBD and practically zero THC.

Most people who use CBD use either edibles, topical ointments, or oil drops placed under the tongue. 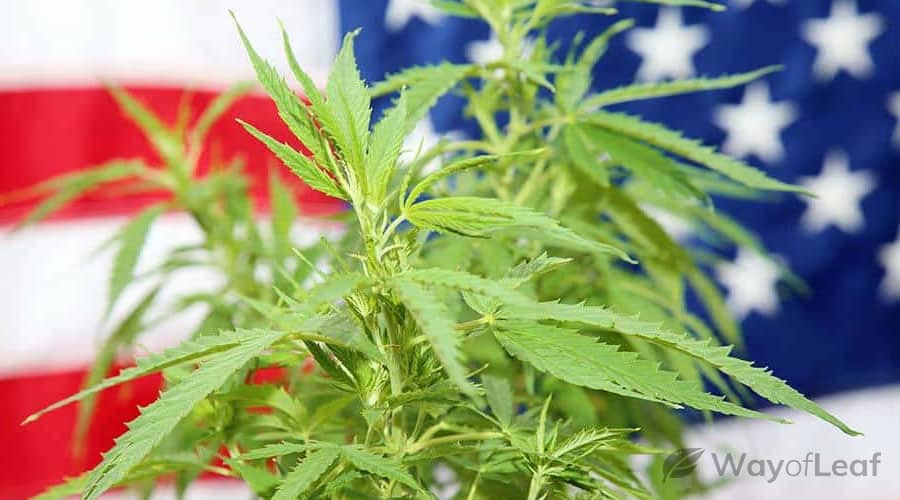 We won’t provide detail here in this article because we have a myriad of CBD-related content on the site. However, it is potentially an extremely useful compound with a lot of possible medical benefits. It could help with depression, anxiety, stress, obesity, inflammation, and chronic pain.

Here are the states that have CBD-only legalization:

In these states, you may require a medical recommendation to buy legal CBD from a state-certified dispensary. Also, the THC limit varies from state to state. In Texas, for instance, the THC maximum is 0.5%, and the product must also have 10% CBD. In Tennessee, a CBD product can have no more than 0.9% THC. In Idaho, CBD oil can’t contain more than 0.1% THC.

Final Thoughts on “Where Marijuana Is Legal?”

You may have noticed that Nebraska has no specific laws on legalized marijuana or CBD. It remains the ONLY STATE in America that refuses to acknowledge what hemp or cannabis can do. CBD laws in Nebraska are far from straightforward.

Make sure you know what you’re getting yourself into when you consider using cannabis.

Overall, cannabis remains illegal in the United States on a federal level. Hemp cultivation is permitted as long as a state submits a pilot program to the United States Department of Agriculture (USDA). Failing that, states can agree to abide by USDA rules regarding hemp.

We hope that this article proves helpful and informative in figuring out where marijuana is legal. It is not an easy topic to stay on top of! Therefore, make sure you know what you’re getting yourself into when you consider using cannabis.

Check the laws in your state, and avoid legal hassle. Remember that even if recreational cannabis or MMJ is allowed in your state, it may remain illegal in your county!

Related article
Has Your County Banned Cannabis Use? [Answered]