China is a big country with even bigger ambitions. For several years it has been considered one of the world’s economic superpowers. Recently China flexed its technological muscles by becoming the first country to land a probe on the far side of the moon.

However, China is also often in the news for the wrong reasons. Its government has some interesting views on territories such as Taiwan and the South China Sea. Plus, its human rights record is not exactly glowing.

However, China is a nation determined to be a world-leader in the future realms of science, technology, and manufacturing. And their ambitions seemingly aren’t limited to these more traditional industries. Another surprising area in which China is flourishing is the cannabis industry.

Despite its zero-tolerance policy towards narcotics, China is now responsible for growing much of the planet’s industrial hemp. But China’s interest in the humble cannabis plant seemingly doesn’t end there. Let’s take a closer look.

Cannabis has been used as a traditional Chinese medicine for thousands of years. It was first mentioned in a text known as the Divine Farmer’s Materia Medica, published in around 200–250CE. Throughout Chinese medicine’s long history, cannabis had many uses. In Ancient China, people used cannabis as a painkiller, as an anesthetic, and to treat seizures and mental illness.

Traditional Chinese medicine is still frequently practiced alongside biomedicine in China. However, you won’t find cannabis on pharmacy shelves in the People’s Republic. The plant was made illegal in 1985. Now, the only part used for medicinal purposes is its seeds, as a remedy for constipation. Sadly, the other medicinal uses of cannabis are now long forgotten. That is, until now.

In the western world, marijuana has been enjoying a massive rise in popularity. Research has begun to highlight many of the herb’s potential health benefits, and legalization is spreading fast.

China has wasted no time in jumping on the cannabis bandwagon. The nation now owns over half of the 600 patents relating to cannabis worldwide!

Many of these patents relate to the medicinal uses of marijuana. Chinese scientists are being encouraged to develop new pharmaceuticals using traditional herbal remedies. Many of these new drugs show great promise, and if successful, could raise the profile of Chinese medicine worldwide.

Aside from its medicinal uses, hemp is mainly grown to make textiles and as a food product. China is also interested in using hemp fibers as a construction material since they are light and environmentally friendly. The use of hemp fibers could be a massive plus for a country that has struggled with hazardous pollution levels for decades.

But will all of this interest lead to the legalization of cannabis in China? It seems highly unlikely, for the time being, at least.

In China, narcotics laws are strict. The population as a whole has a very negative attitude toward drugs. This anti-drug sentiment is in part due to the devastating aftermath of the 19th century Opium Wars. These wars began as a trade dispute with the British, but ended in a massive loss of life, especially on the Chinese side. Another knock-on effect was millions of Chinese left addicted to opium. This problem continues to plague the country. 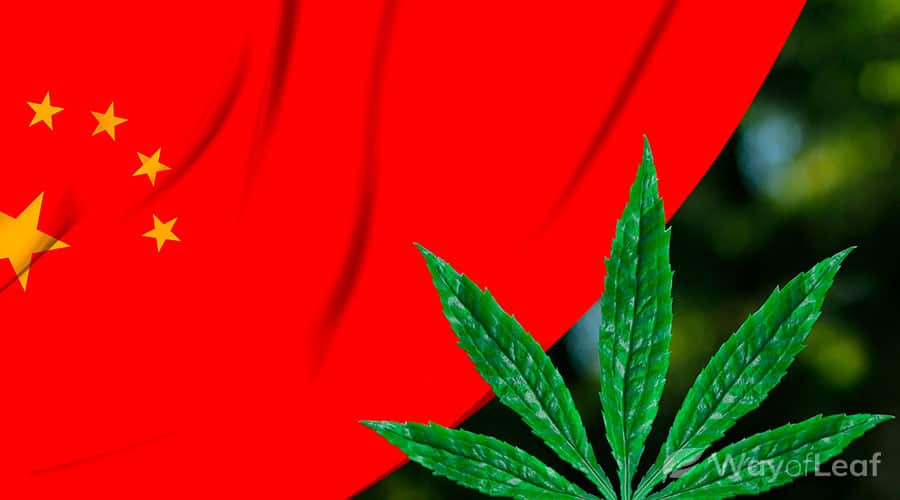 China also borders the countries Myanmar and Lao PDR, home to the ‘Golden Triangle’ of opium production. As a result, this has led to serious issues with the trafficking of the drug throughout history. It also may well have contributed to the Chinese opinion of narcotics.

Unfortunately, China makes no distinction between harder drugs, such as opium, heroin, and cocaine, and cannabis. If you are found with any of these substances in China, the punishment is likely to be harsh. In China, drug penalties may include a trip to “compulsory rehabilitation” for as long as two years. Drug crimes deemed less severe could result in 10–15 days’ imprisonment and a hefty fine.

On the other hand, China is actively encouraging research into narcotics to develop more effective treatment methods and prevent trafficking. Cannabis plants can be grown for research purposes, but cultivation is highly regulated.

However, one cannabis variety can be grown and used freely in China – industrial hemp. With a THC content of below 0.3%, hemp has no intoxicating properties. Therefore, the Chinese government does not classify industrial hemp as a narcotic substance, and Chinese farmers are taking advantage.

Hemp is quickly becoming one of the most widely grown crops in the country. Hemp is not only environmentally friendly but also quick and easy to grow and incredibly versatile.

As worldwide demand for hemp steadily increases, China will likely be at the forefront. China is ready to meet other countries’ needs, as well as its own.

The Rise and Rise of the Chinese Hemp Industry

Just a couple years ago, estimates of the Chinese hemp industry’s value deemed it to be worth $1.1 billion. This figure is expected to grow exponentially in the coming years. There are many different reasons why the industry is taking off so rapidly. There are also just as many reasons why China could lead the way.

In China, the most common use of hemp is as an alternative to cotton for making textiles. Compared with cotton, hemp requires less space, less water, and fewer pesticides to grow. Therefore, it is better for the environment, but also it is cheaper to produce. As a result, this makes hemp an attractive prospect for farmers looking to get the most out of their land and consumers looking for a greener way to shop.

The next most common use for hemp in China is as food. Its seeds are highly nutritious and a good source of omega-3 and omega-6 fatty acids and protein. With more people moving to plant-based diets, hemp will likely become even more popular as a food source in the future.

Another hemp product that is edging its way onto the Chinese market is CBD oil. Research shows that CBD has a plethora of clinical applications. Some are not dissimilar to those for which cannabis was originally used in Chinese medicine. CBD is possibly one of the fastest-growing markets when it comes to hemp products in China. A few years, Chinese CBD products brought home an impressive $53 million, a figure that’s been predicted to quadruple in the coming years!

In addition to these uses, hemp fiber is now being utilized as a construction material. Hemp oil is a major ingredient in many fashionable personal products and cosmetic brands.

As hemp’s reputation continues to shine, global demand is sure to rise. Luckily for China, the country is ideally placed to meet its own requirements and more.

Currently, most Chinese hemp is grown in Heilongjiang. Heilongjiang is a province in North-East China which shares a border with Russia and is famed for its freezing winters. Around 74,000 acres of hemp is produced in Heilongjiang every year. This figure is equivalent to the overall area dedicated to growing the crop in either Canada or Europe. There are already plans to double hemp production in Heilongjiang in the coming years.

When you consider that Heilongjiang is just one province of 34 (including municipalities like Beijing and autonomous regions such as Tibet), the opportunity for growing vast quantities of hemp in China is very real. Add into the mix the enormous population – and, therefore, the potential workforce – and you have a guaranteed recipe for success.

Another significant advantage that China has is its size and geographical location. China’s large area and placement on the Earth means that it is a country with pretty much every climate imaginable.

From the north’s sub-zero winters to the south’s tropical forests, there is a habitat suitable for growing pretty much any type of cannabis the Chinese choose. If the government were ever to relax its laws on higher-THC strains, the possibilities would be endless!

Although cannabis is still very much illegal, the hemp industry is booming in China. The country has the space and the human resources to produce an enormous amount of this versatile crop. Therefore, in the future, it could well dominate the market.

One key area to watch is the CBD industry. Respect for this natural remedy is increasing worldwide. Also, the Chinese have a special link with cannabis as a medicine, spanning over 2000 years. The government will undoubtedly be keen to preserve this link in its ongoing efforts to bring Chinese medicine up to date and promote its benefits to the world.

Next time you pick up a hemp or CBD product, take a look at where it was produced. You could well find more and more of these items carrying the famous ‘Made in China’ mark in the future.

Related article
Exploring the Use of Marijuana in Chinese Medicine

Exploring how cannabis has imp…