It should be no surprise that the marijuana industry has experienced a gigantic burst of rapid growth in recent years.

While it used to be that most people feared even the merest mention of marijuana, it is nowadays being considered as on par with medical options for treating all manner of different conditions.

However, while more marijuana and marijuana products being available can only be a good thing for most people, there is one big group that is not especially happy about this development: The pharmaceutical industry.

But exactly how much does marijuana’s explosion in popularity affect Big Pharma? Is this really a case of marijuana versus the pharmaceutical industry?

Is the Cannabis Industry a Threat to Big Pharma?

At first look, it might seem logical to assume that there is no way that marijuana or the growth of the marijuana industry could possibly affect the pharmaceutical industry.

After all, the pharmaceutical industry is worth almost half a billion dollars, according to government statistics, so surely they don’t need to fear the growth of marijuana?

Well, in actual fact, Big Pharma has been observed acting incredibly hostile towards all possible growth or positive trends in the marijuana world, such as actively campaigning against the legalization of marijuana within individual states, or just generally trying to counteract its growth.

What’s more, large pharmaceutical companies have been hard at work in developing all manner of different synthetic cannabinoids, seemingly so as to try and control the release of cannabinoids in the health market.

Inysys, a large pharmaceutical company, released a synthetic cannabis substitute called Syndros, which is little more than a liquid form of Dronabinol, designed to mimic the effects of THC, the primary cannabinoid found in cannabis.

Other companies have done the same thing, releasing Marinol and Cesamet, two other commonly sold THC substitutes which were managed to be approved by the FDA for human consumption.

The fact that pharmaceutical companies are only too eager to devise and sell their own cannabis replacement products, all the while campaigning against the usage of all-natural cannabis, is rather telling of their true motivations.

However, there are numerous studies, such as this seminal one by Koby Cohen and Aviv M. Weinstein, that point out that the use of synthetic cannabinoids increases the risk of developing serious psychiatric and medical conditions, as well as increased instances of significant adverse effects, like respiratory difficulties and hypertension.

In other words, it is far, far better to simply stick to using regular, natural cannabis, rather than using fake synthetic alternatives. But why does Big Pharma seem to care so much? What possible impact could the marijuana industry truly present to the pharmaceutical industry? 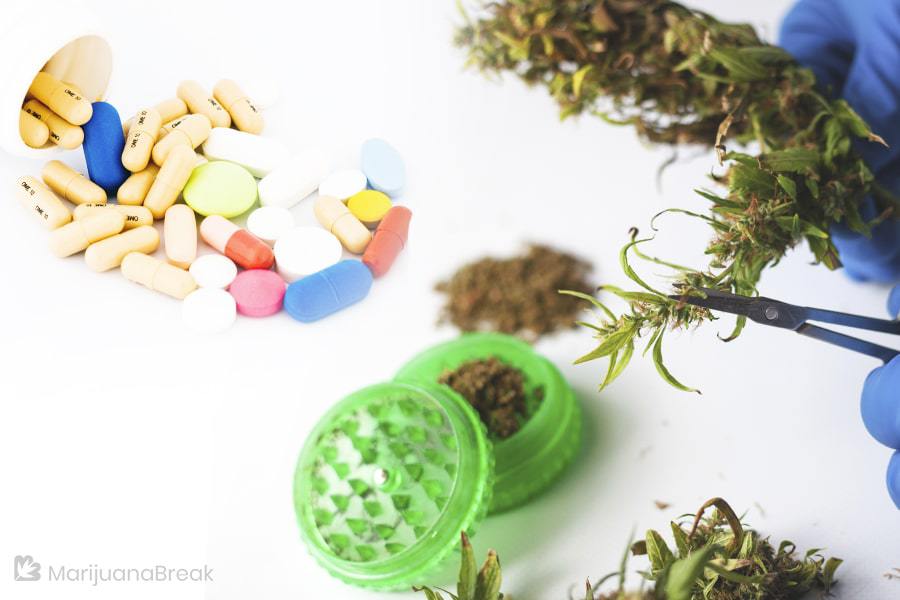 All the hostility exhibited by the pharmaceutical industry begins to make sense when you consider how they are affecting sales.

In a study by Bradford AC and Bradford WD, researchers found that when a state passed laws that allowed for the sale of regular marijuana in a medical capacity, the prescription habits of that state’s doctors changed.

Before legalization, doctors could be observed prescribing all manner of different drugs, as well as a myriad of opioids and other commercially available medication. However, once medical marijuana was legalized, the rate at which other drugs were prescribed fell dramatically.

Doctors were able and eager to prescribe marijuana as a natural source of pain relief or as a treatment for other symptoms over using more expensive, potentially harmful commercially available products.

The reason doctors often did this was because of the fact that a patient could very easily pick up their own medical marijuana, requiring only the doctor’s advice about what kind of strain they want to get.

Or, if they were prescribed a specific strain from a specific institution, it would still be massively cheaper for the patient than it would be if they were forced to only buy the regular types of medication commonly on offer.

In fact, the study found that there was a total of $165.2 million per year saved across the USA from states with implemented medical marijuana laws, thanks to the savings of not having to prescribe expensive drugs.

Another study, by Bachhuber et al. for the Journal of the American Medical Association of Internal Medicine, found that the rate of opioid overdoses within states that had passed medical marijuana legislation had fallen by roughly 24%.

While it is always problematic to assume that causality equals causation, these findings would seem to suggest that people were not only being prescribed medical marijuana rather than opioids but that they were also freely choosing to enjoy marijuana as a recreational drug, rather than harder, more dangerous drugs like Heroin and Fentanyl.

So, What Is the Pharmaceutical Industry Going to Do?

Your first reaction might be to feel sad for the pharmaceutical industry; after all, if their profits start to dip as a result of medical marijuana and legalized marijuana in general, that might mean that newer, novel drugs might not get developed due to lack of funding, right?

Well, don’t worry too much – Big Pharma is one of the biggest players in the country at the moment, with profits in the literal hundreds of billions, so you shouldn’t concern yourself with worrying about newer projects getting funding.

What you should worry about, however, is what Big Pharma is going to do to try and stop the rise of medical marijuana.

Although they have been pretty clear in their desires to fight against medical marijuana in the past, with massive donations to anti-legalization campaigns throughout the country, they have also been developing attempted competitive products: Synthetic cannabinoids.

Aimed at those that desire the therapeutic effects of cannabinoids, but without as much of the high or the apparent social stigma of using regular marijuana, synthetic cannabinoids like  Marinol and Cesamet seek to try and compete with the sale of natural cannabis.

However, there are some times when folklore and common wisdom wins out against the desires of big companies; marijuana has been used by people all over the world for thousands of years, both for recreational enjoyment and for medical purposes.

When ancient peoples enjoyed marijuana, they did so using the whole plant; harvesting the seeds, smoking the buds, and even using the leaves as part of their medication.

One of the significant differences between synthetic cannabis products and regular marijuana is the fact that marijuana contains far more varied and complex cannabinoid compounds than just THC.

THC might be what marijuana is most well known for, but CBD is also recorded in abundance within the plant, as well as being one of the major contributing factors into helping suppress the development of psychosis, according to such studies like this one by Dalton et al. for the Journal of Clinical Pharmacology and Therapeutics.

Additionally, other cannabinoids like THCA and CBN exist in minute quantities within marijuana, as well as an abundant mix of different terpenes, which are the chemical compounds that are responsible for the unique flavors and aromas of individual strains.

These all combine into one complete experience, making smoking marijuana a far more therapeutic, medical experience than just synthetic cannabis products can offer.

What’s more, marijuana has the immediate advantage of being able to be grown at home – in almost every state that has legalized the sale of recreational marijuana, you are permitted to grow a limited number of marijuana plants for your own use.

This means that, if you were to develop a condition that required treatment with marijuana on the advice of a doctor, you would not be reliant on the whims of a pharmaceutical company with regard to pricing so as to get your medicine; you could simply grow your own.

No matter what the pharmaceutical industry hopes to do to try and battle the rising tide of marijuana, it is very likely that they will end up on the losing side.

Final Verdict About Marijuana vs. the Pharmaceutical Industry

The idea of one of the largest industries within the USA battling against a plant likely seems pretty ludicrous.

After all, surely a simple plant cannot prove that much of an opponent to one of the biggest moneymakers in the country?

However, with the rise of both medical marijuana and fully legalized, recreational marijuana, people are being able to not only medicate themselves, but they can also do so cheaply, without having to pay massive pharmaceutical conglomerates huge amounts of money for simple medications.

While marijuana might be pretty harmless and considered nothing more than a recreational activity for many people, it actually represents a significant ideological shift in the USA.

Instead of having to rely solely on what gigantic companies and Big Pharma say, people can instead begin to rely on the tried and tested practices of a simple plant, as well as the myriad years of history and knowledge that go alongside it.

While the gigantic pharmaceutical industry isn’t going anywhere anytime soon, marijuana definitely represents a significant adversary for those looking to continue to make money at the expense of the wellbeing of others.

Marijuana may be just a plant with some fun effects and some useful medical properties, but it is quickly growing into so much more than that, so Big Pharma had better be ready.