How Much Marijuana Is It Possible to Smoke in a Month?

The marijuana scene has changed markedly in little over a decade. Up until 1996, there was an almost 60-year prohibition in place. Finally, in that year, California broke the cannabis barrier by allowing the legalization of medical marijuana. It was a pivotal moment in the modern history of weed, but advocates had to wait for other states to follow suit. Indeed, there are still 17 states with no provisions for MMJ.

Things have improved significantly in the last decade, however, as recreational weed first came to Colorado and Washington state in 2012. In the intervening seven years, nine more states have followed, and we expect many more to join in the next few years. What’s noticeable is how open cannabis users are in legal states.

Take the legendary boxer, Mike Tyson. The one-time ‘baddest man on the planet’ was a world heavyweight champion by the age of 20, and undisputed #1 before his 22nd birthday. The death of Cus D’Amato was one of several reasons for his sudden spiral. A shock defeat to Buster Douglas in 1990 was followed by imprisonment after conviction for rape in 1992. He seemed finished by his mid-twenties! Even though he won a world title after his release from prison, Tyson was a shell of himself and ended up losing to a collection of low-grade fighters.

These days, Tyson seems happier with a different perspective on life. Aside from his beloved pigeons, one of Iron Mike’s passions is marijuana; a fact he is not shy about voicing.

The above isn’t a misprint. Tyson claims that along with friends, colleagues, and visitors, he goes through $40,000 worth of marijuana on his 40-acre ranch every single month. He broke ground on ‘Tyson Ranch’ in December 2018. You can find it in California City, a desert area approximately 60 miles southwest of the Death Valley National Park.

It is heralded as a good business decision because the region expects a significant rise in marijuana production. One of Tyson’s business partners, Robert Hickman, described the ranch as an oasis in the desert. Approximately half of the ranch’s land hosts cultivation facilities that “enables master growers to have maximum control of their environment.” There is also a Tyson Cultivation School to teach prospective growers the best way to perfect their strains.

There is a lot of cool equipment there, including:

Tyson is a known proponent of the healing properties of the herb. Therefore, it is no surprise to learn that the ranch wants to improve medical research and treatment regarding weed. The former boxer and his team want to grow high-THC and high-CBD strains. Tyson Holistic operates the business and features a significant number of veterans. As such, one of the goals is to help those who served in America’s armed forces.

Overall, Tyson Ranch seems to have all the ingredients for success, and Mike and his friends are not afraid to get high on their own supply. 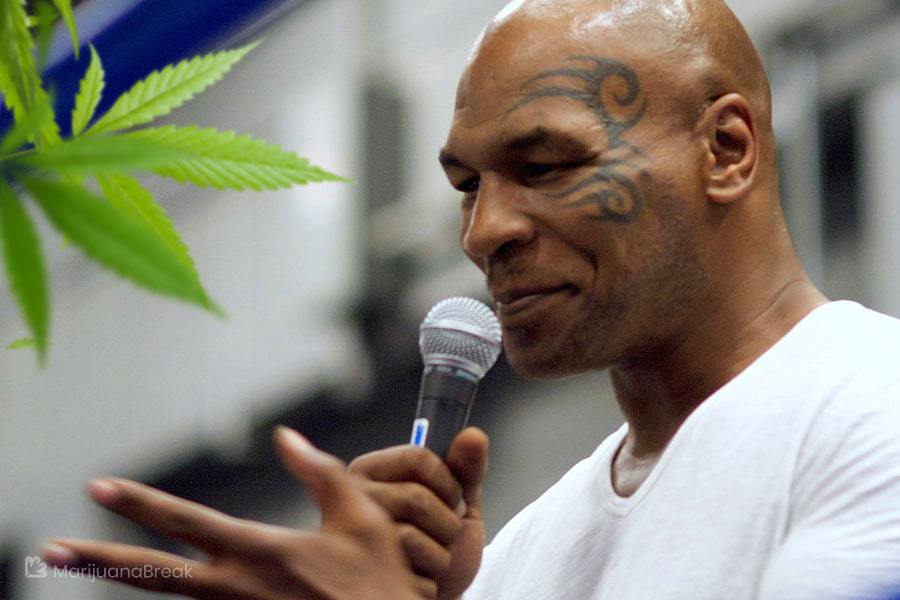 Tyson hosts a marijuana-related podcast titled Hot Boxin’ with Eben Britton. In August, a Harlem rapper named Jim Jones stopped by for a chat. Jones began discussing his involvement in the industry and said it made sense because of how much he spends getting high. Tyson intervened and claimed that at the ranch, the team smokes around $40,000 worth of weed per month!

Britton chimed in and said they go through 10 tons in that timeframe! That is 20,000 pounds, assuming Britton means the U.S. ton. Tyson asked his guest: “Is that crazy?” Clearly, he already knew the answer! Jones isn’t afraid of a joint or two, but even he was taken aback at the scale of his host’s usage.

We know that Mike likes a toke, but that seems excessive. Is it even realistic?

Calculating Weed Use at Tyson Ranch

According to Price of Weed, ‘high-quality’ marijuana costs $258 per ounce in California on average. We will assume that Tyson Ranch produces Grade- A herb, which it probably does, given the level of investment and location. Using this price as our guideline, it suggests that Tyson and his crew go through 155 ounces per month.

There are various estimates for the average amount of weed in a joint. The RAND Corporation believes it is 0.32 grams per joint. A study by Mariani et al. published in Drug and Alcohol Dependency in 2012, place the figure at 0.66 grams for a joint and 0.97 grams for a blunt.

There are 28.3495 grams in an ounce, which equates to 4,394 grams in 155 ounces. Overall, these figures suggest around 6,657 joints or 4,530 blunts in a month. Even in a 31-day month, these numbers equate to over 200 joints or almost 150 blunts per day. We have heard of experienced users adding 2 grams per blunt. In this scenario, the Tyson crew smokes the equivalent of 71 fat blunts per day.

One, two, or even three people will not go through 70+ blunts a day! What’s more realistic is if the crew consists of 30+ people who each smoke 2-3 of these massive blunts per day.

According to a member of RAND, the average experienced, frequent marijuana user goes through 1.6 grams a day. In a 31-day month at that figure, the Tyson Ranch team would need to consist of 90 people.

If Tyson is referring to the amount of weed smoked by everyone who visits the ranch, the $40,000 per month figure doesn’t sound nearly as outlandish as first thought. This is especially the case if Tyson is referring to his entire crew and visitors. We can’t say the same for Britton’s ‘10 ton’ claim. One must assume that it was a figure of speech rather than an accurate estimate.

Hey, let’s not judge these guys too harshly! Exaggeration is part and parcel of the game. Besides, he is Mike Tyson, and not many people will call him out on this to his face!

Be Wary About Your Usage

Although there are many perceived health benefits, it is incorrect to assume that marijuana is 100% safe. As the saying goes: “Everything in moderation.” We know that the ridiculous Gateway Drug theory is an outright falsehood, but it is possible to develop an addiction to cannabis. The National Institute on Drug Abuse places the addiction level at 9% of users. This figure is lower than alcohol and tobacco, but high enough to cause concern.

The diagnostic criteria for cannabis abuse are:

Marijuana use could also have an impact on the shape, size, and density of the brain, especially in users aged 25 and younger. Rather than delving deeper into the issue in this guide, let’s say this: If cannabis use is interfering with daily life, take a step back and perhaps ask for help.

Final Thoughts on Marijuana Use

There seems little doubt that the level of weed usage on Tyson Ranch is exaggerated. While Iron Mike’s estimate is barely feasible with enough visitors, Britton’s ‘10 ton’ claim is almost certainly a turn of phrase rather than a real figure. At the average 1.6 grams per day figure, Tyson Ranch would need to get over 66 million annual visitors, almost double Times Square in New York! If you want to call Mike Tyson a liar, visit him (we do not recommend that).

What matters is that Tyson is a high-profile advocate of the herb. The industry needs more people like him to continue its move into the mainstream. However, we urge you to take stock of your usage. A little marijuana could help a lot, but a lot of pot could mean you need help.

Understanding what's allowed and what's not...

Cannabis History: A Timeline on the History of CBD