The mysteries of ancient Egypt only really began unraveling at the beginning of the 20th century. We can trace the ancient Egyptian civilization as we know to approximately 3100 – 3050 BC. This era is called the Early Dynastic Period. Historians know relatively little about this era of history. There is even dispute as to the identity of the first pharaoh, who was probably called Nemes.

The pharaohs’ age ended when Octavian became the first Emperor of Rome. Egypt became a province of the new Roman Empire in 30 BC. Up until recently, it was assumed that marijuana wasn’t widely used in ancient Egypt. However, recent evidence shows that this isn’t the case at all.

When Did the Ancient Egyptians Begin Using Weed?

It is interesting to note that most books on ancient Egypt before the 1930s omitted any mention of cannabis use. It was a lack of knowledge that led to this oversight. Remember, archaeologists only started learning how to decipher hieroglyphics in the middle of the 19th century. They were unable to identify all of the medicines mentioned in the papyruses properly.

Historians only discovered and understood evidence of marijuana use in ancient Egypt from 1934 onward.

Historians only discovered and understood evidence of marijuana use in ancient Egypt from 1934 onward. It was in this year that an article by Warren Dawson mentioned Cannabis sativa when discussing ancient Egypt. He wrote that its use was ‘rare.’ However, uterine contraction, a sore toenail, irrigating the rectum, and fever, were some of the reasons why the ancients used it.

Scrolls dated to approximately 2000 BC found in Kemet (ancient Egypt) suggest that the Egyptians consumed weed for cataracts and sore eyes.

The next mention of medical cannabis in ancient Egyptian literature comes from the Ramesseum III Papyrus dated 1700 BC. It is a collection of medical documents found in the temple of the Ramesseum. You can now view the papyrus in the British Museum. It mentions that weed was used for glaucoma.

The next important scroll is the Ebers Papyrus, dated 1550 BC. It contains the inscription of a prescription that mentions marijuana and its use in the treatment of obstetrics. The Egyptians ground the weed in honey and introduced it into the vagina to keep the uterus cool. Cannabis was likely used as an anti-inflammatory.

The Ebers Papyrus also says marijuana could help with sore toenails. Physicians combined weed with hedjouresin, ibou plant, honey, and ochre to create a mixture to dress the wound.

Both the Berlin Papyrus and Chester Beatty Medical Papyrus VI are from approximately 1300 BC. In the Berlin scroll, marijuana is mentioned as an ointment to relieve fever. The Egyptians may even have tried cannabis as a suppository!

Other Uses of Marijuana in Ancient Egypt

The ancient Egyptians didn’t just use cannabis for medicinal purposes. It was quite possibly used for recreational purposes as well. Archaeologists discovered the mummy of the legendary pharaoh, Rameses II. 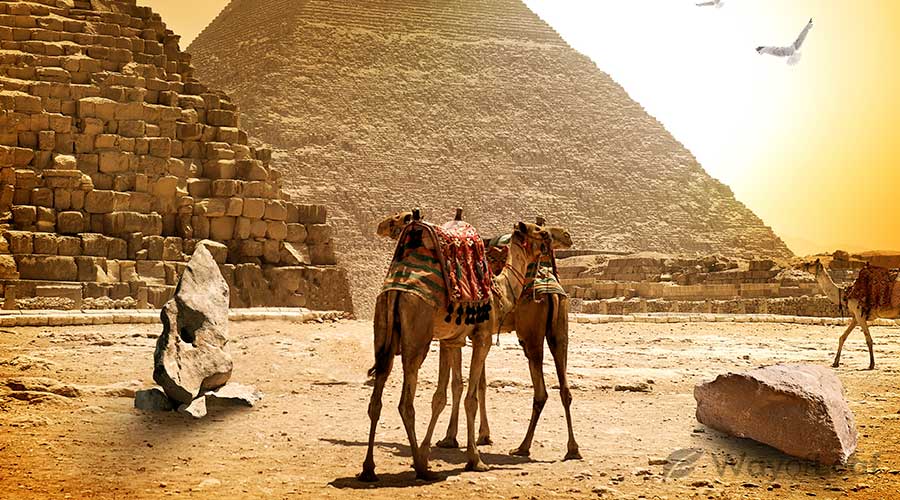 The famed Egyptian ruler died in 1213 BC, and researchers found traces of cannabis pollen on his body. There were also pieces of hemp in the tomb of Amenophis IV, who died in 1379 BC. Traces of weed have been found in several other mummies since.

The Egyptian Goddess of Wisdom, Seshat, is depicted with a marijuana plant leaf above her head in numerous paintings. Bastet, the feline Goddess of War, is also linked to marijuana use in the region. Worshippers of several Egyptian gods probably consumed weed in religious festivals and activities.

Hemp Use in Ancient Egypt

Hemp is also part of the Cannabis sativa plant. Ancient Egyptians possibly used it to make rope, textiles, fine linen, and sails. There are references to cannabis hemp in the writings of the pyramids. It is suggested that a ‘three-ply hemp cord’ was found in the ruins of El Amarna.

It is the city of the infamous pharaoh, Akhenaton (the heretic), who ruled Egypt from 1353 BC to 1336 BC. The fiber probably came from Deccan hemp rather than Cannabis sativa, however.

There is a suggestion that Egyptians used hemp fiber as early as 2500 BC.

There is a suggestion that Egyptians used hemp fiber as early as 2500 BC. This is the date given to the creation of the famous Khufu Boat. It was sealed into a pit in the Giza pyramid complex. The ship gets its name because builders created it for Pharaoh Khufu, also known as Cheops. It seems as if the cedar timbers of the hull were tied together with hemp rope. The workers used a technique used by shipbuilders until the modern era.

Ancient Egyptian workers likely used a special technique to break down huge boulders. It involved hammering down dry cannabis fiber into the cracks of the rocks. Next, they soaked fiber and rocks in water until the fabric expanded enough to fully fracture the boulders.

Doubts Over Marijuana Use in Ancient Egypt

A significant number of historians are skeptical about the likelihood of weed being used in ancient Egypt. Other findings have uncovered traces of nicotine and cocaine in the tombs of pharaohs. This goes against everything we know about world history to this point. The prevalent belief is that there was little or no contact between the ‘Old’ and ‘New’ world in the pre-Columbian era (before 1492).

If ancient Egyptians used nicotine, weed, and tobacco, everything we know about the ancient world would change. It would show that there WAS contact between the Old and New Worlds thousands of years before we now assume. Such an occurrence would also imply significant trade links that remain undiscovered. It is important to note that certain Old-World plants produce tiny amounts of cocaine and nicotine.

In any case, marijuana use in ancient Egypt would mean that civilizations from the Middle East traveled to Egypt. This is not an impossibility. The likes of the Aryans would not need to travel overseas to make it from Iran to Egypt.

Several prominent academics responded to the studies of Balabanova, Pirsig, and Parsche. These individuals outlined the discovery of weed, nicotine, and cocaine in Egyptian mummies. Cocaine and tobacco are indigenous to America. Therefore, it seems incredibly unlikely that there was any trade link between the two continents so early in history.

The Ebers Papyrus does not mention any drug we could classify as tobacco or cocaine. Also, it mentions poppy seeds rather than marijuana, according to a researcher called Professor Hertting of Freiburg, Germany. There are potentially several reasons why traces of drugs were found in tombs.

Nicotine is a powerful insecticide and could have been used to preserve the mummies in modern times. Indeed, contamination of tombs is common, and we don’t know how many discovered tombs had been raided before. There is also a lack of understanding regarding neurobiochemical and neurochemical processes during mummification. For all we know, cocaine-like substances appear naturally during artificial mummification.

There is evidence to suggest marijuana use in ancient Egypt occurred. It seems likely it was used from at least the first century BC. A Greek historian named Diodorus Siculus, who probably lived from 90 BC to 30 BC, had some interesting writings. He said that Egyptian women used marijuana as a form of medication to relieve sorrow, treat insomnia, and alleviate pain.

The Vienna Papyrus is from approximately 200 AD. It is a composite of ALL other ancient Egyptian medical knowledge up to that point. The Roman Emperor Aurelian, one of the most underrated military commanders of all time, ruled Rome from 270 to 275 AD. During his reign, marijuana use was so prevalent in Egypt that he decided to tax it!

Final Thoughts on Marijuana Use in Ancient Egypt

There is some debate as to whether cannabis was used in ancient Egypt at all. Mentions of weed occur in several scrolls from up to 4,000 years ago, and cannabis pollen was found on pharaohs’ mummies. However, there is a possibility that contamination is responsible.

There is some debate as to whether cannabis was used in ancient Egypt at all.

Yet, it isn’t as unlikely as Egyptians somehow having access to nicotine and cocaine. These substances were only available thousands of miles away at that time. Marijuana was widely used in the Middle East by 1500 BC. Therefore, it isn’t much of a stretch to suggest that it made its way to Egypt at around the same time.

How to Make DIY Marijuana Oil

3
3 min read
Join the discussion
TOC
Premium
Your subscription has ended
If you love cannabis and want to support our site, join WayofLeaf Premium today and unlock
Best of all, part of your membership fee will go towards supporting the fight to legalize cannabis.
Sign Up for WoL Premium
Not now
I already have an account
×
Log in to Your Premium Account