The year was 1992. We were veering towards the new millennium as technological advances gathered apace, and the World Wide Web had just been released to the general public a few months back — there was an element of optimism in the air after the chaotic (but totally radical) Eighties.

Despite rapid developments in many fields, America, like most countries in the world, had a backward attitude toward marijuana.

At the time, just 16% of Americans believed weed should be legalized, compared to 30% in 1980. Cannabis was a casualty of the failed War on Drugs, and the chances of it becoming legal seemed minute. It was a grim time for marijuana proponents, and had they been spineless and weak like an increasing number of the nation’s politicians today, the fight to bring weed into the light would have been lost forever. Fortunately, there were men and women of character and substance who refused to quit.

The Formation of the San Francisco Cannabis Buyers Club

While it was a dark time for marijuana enthusiasts, a glimmer of light appeared at the end of the tunnel in 1991 with the passing of Proposition P in San Francisco. 80% of voters passed the ballot initiative which legalized the medical use of cannabis within the city’s limits. It was a pivotal moment in the history of weed in the United States because it started a movement that grew into what is now an unstoppable force.

Dennis Peron, known as the ‘father of marijuana in San Francisco’ (and who sadly passed away in January 2018), was one of the leading cannabis activists in the United States. The New York-born Peron was a Vietnam veteran who moved to San Francisco’s Castro District after serving his country. Peron flouted the law by selling weed from storefronts. He saw how medical marijuana had helped patients with AIDS, and became a staunch advocate for its legalization.

| “Dennis Peron, known by many as the ‘father of marijuana in San Francisco,’ was a leading figure among medical cannabis activists in the United States.”

Peron even saw the deadly disease take his partner, Jonathan West, who died from AIDS in 1990. The following year, it was Peron who organized the passage of Proposition P. He also founded the San Francisco Cannabis Buyers Club in 1991 (incidentally, Peron’s businesses were raided by authorities twice; once in 1978 and again in 1990).

The passing of Proposition P meant that Peron had more leeway to sell medicinal marijuana in San Francisco, and as a result, he was able to open the San Francisco Cannabis Buyers Club – the first ‘legal’ public marijuana dispensary in America. He did so with the help of numerous leading cannabis activists such as Beth Moore, John Entwistle, and Richard Eastman.

The club was located at 194 Church Street, formerly the location of an illegal medicinal marijuana retail location. It had been organized by Thomas O’Malley to help patients with AIDS. Sadly, O’Malley succumbed to the disease in 1992. Initially, the Club sold its wares at Ford and Sanchez Street before moving to Church Street in 1994.

The Road to Proposition 215

It is important to remember the era we are discussing. Back then, California was not quite the marijuana paradise it is today. State governors were typically Republican, and the police were often brutal in their treatment of marijuana users and dealers. During one raid, Peron was shot by a police officer who later admitted that he wished he killed Peron because there would be “one less faggot in San Francisco.”

The majority of the men and women involved the creation of the Club had previously been arrested for selling marijuana. For example, ‘Brownie’ Mary Rathbun was caught with three pounds of pot she intended to use for hash brownies (and distribute to AIDS patients) in 1992. This act turned out to be a huge mistake by law enforcement, because Rathbun ended up becoming a hero in her community.

She was renowned for baking her special brownies and handing them to patients at the HIV/AIDS Ward in the San Francisco General Hospital. The arrest catapulted Rathbun into the spotlight, and she appeared on national TV with slots on shows such as Sally Jessy Raphael and Maury Povich.

If you’ve ever seen the movie ‘Dallas Buyers Club,’ you’ll have a decent idea of how the San Francisco Cannabis Buyers Club may have operated.

However, it was actually modeled on the city’s AIDS Drugs Buyers Club that had previously formed in Castro to distribute therapies such as DDI and AZT that were still in the ‘experimental’ stage. The idea behind giving weed to AIDS patients was to take the edge off the pain; the other experimental drugs had harsh side effects. None of the activists believed it would cure the disease.

For Peron and the other members of the collective, the next step was the legalization of medical marijuana throughout the state of California. They knew jail time was a likely outcome of their fight against the government and law enforcement, but nothing was going to stop them from succeeding. The Club’s first public marijuana sales came from Peron’s basement. It was a TV news publicity stunt, and the ‘shop’ was called ‘Brownie Mary’s Cannabis Café.’

The goal was to get arrested and bring the plight of marijuana sellers and users to public attention. They didn’t get arrested, but TV stations that showed the segment were inundated with callers begging for the location of the ‘secret’ store. Peron and the team knew they had to open a legitimate location in public, and did so at Ford and Sanchez. They moved to Church Street soon after, before switching to 1444 Market Street in 1995. At that time, the Club’s membership had grown to 8,000; Peron and friends had succeeded in outlining the need for medical weed, but one large obstacle stood in their path.

Victory for the First Weed Dispensary in the US!

The members of the Club spent years working on Proposition 215, a bill that proposed legalization of medical marijuana throughout the state of California. It was submitted in 2015, and finally, the measure was scheduled to be put to the vote on November 5, 1996. Initially, the outlook seemed promising as billionaire donors such as Bill Zimmer and George Soros helped fund the campaign.

However, disaster struck when Dan Lungren, the Attorney General, raided the San Francisco Cannabis Buyers Club and arrested everyone just months before the election day.

Remember, marijuana was, and still is, federally illegal, so Lungren was within his rights to perform the raid. However, despite the best efforts of Lungren and anti-marijuana campaigners, Peron and the Club would have their day. 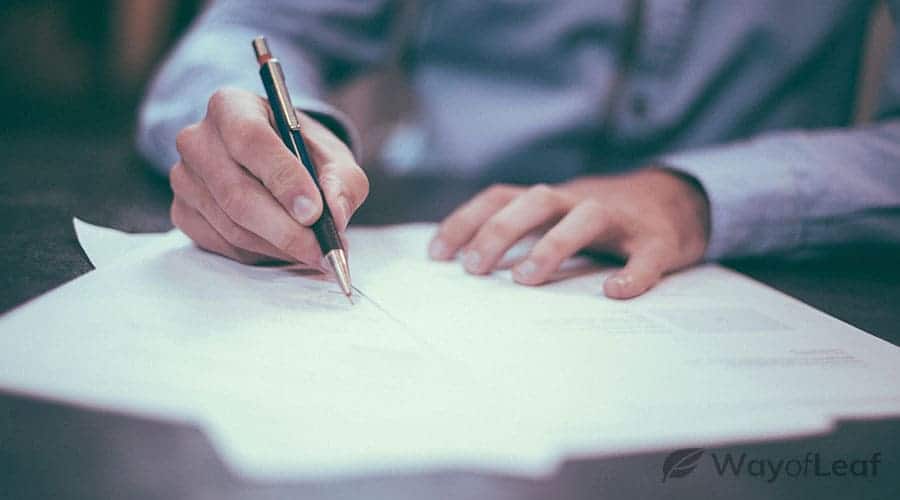 Matters were greatly helped by the fact it was a Presidential Election year, and the incumbent President, Bill Clinton, was a Democrat in what was a heavily Democratic state, even though Governor Pete Wilson was a Republican.

In the end, Proposition 215, also known as the Compassionate Use Act of 1996, passed with 55.6% of the vote. It was the first medical marijuana ballot initiative to be passed at state level, and it set off a chain reaction throughout North America. Within two years, Initiative 59 was voted in, which allowed medical marijuana in the District of Columbia (although Congress blocked it until 2009). Then, in 2000, Hawaii became the first state legislature to legalize weed for medical use.

The framework at the time was very different from the system that’s in place today. Initially, there were no official MMJ cards. Instead, you needed a letter from a physician to avail of the weed. Despite the victory, Lungren continued to abuse his power by raiding dispensaries. His goal was to raise his profile so he could run for governor. He made his bid for office in 1998 but failed miserably, gaining just 38.9% of the vote against the Democratic nominee, Gray Davis, who received 57.9%.

In 2003, Davis signed Senate Bill 420, which established an ID card system for medical marijuana patients and legalized the formation of dispensaries. Incidentally, dispensaries were not legal in San Francisco until 2004.

Although Peron had been pivotal in the passing of Proposition 215, he knew his work was far from being completed. He even ran against Lungren in the 1998 Gubernatorial election.

Peron continued to fight for the decriminalization of all marijuana use because it is a medicine; although he firmly believed that minors should not be allowed to use it. Like many other activists, Peron only ever believed weed should be used medicinally, which is why he was against the passing of Proposition 64 in 2016 (which would have legalized cannabis for recreational use).

Later in his life, Peron retired to a cannabis farm near Clearlake, CA, and died from lung cancer on January 27, 2018. There is no question that the dispensaries operating across the United States forever owe him – and the rest of the San Francisco Cannabis Buyers Club – an enormous debt of gratitude. At the beginning of 2018, there were over 40 marijuana delivery and dispensary services in San Francisco alone!

None of these locations would even exist, nor would we even be allowed smoke weed freely in some states, without the noble efforts of the San Francisco Cannabis Buyers Club.