The cannabis industry is one of the fastest-growing on the planet. According to a report by Grand View Research, the legal market’s value could exceed $73 billion by 2027. Meanwhile, Geneva Business News estimates the total value, legal and illegal, at over $340 billion per annum right now!

However, despite its progress on many fronts, cannabis has taken a toll on the environment. Environmentally friendly cannabis, therefore, has become a growing concern in the more earth-conscious mindset of today’s generation.

What is environmentally friendly cannabis? Is it even possible to grow marijuana in this way? Let’s find out in this article.

Did you know that only 3% of the Earth’s surface consists of freshwater? Moreover, less than 0.5% is accessible for consumption as drinking water. Major global cities such as Tokyo, London, and Beijing could have water shortages in the future.

A study published in Nature Climate Change in November 2018 had further bad news. It showed that groundwater in aquifers is extremely sensitive to climate change. This body of water comprises more than one-third of the planet’s domestic water supply.

A survey conducted in California’s Mendocino County region outlined the problem. It found that a 50-foot by 100-foot plot with 50 marijuana plants uses 24,000 gallons per growing season. This is the equivalent of 100 gallons used per day.

The 50 plants produce approximately 1,600 ounces of cannabis. Therefore, the plot uses 15 gallons of water for every ounce of weed produced. Bear in mind that this survey covered regulated growers. Illegal cultivators likely waste a lot more. Here are a few ways in which marijuana cultivation wastes water:

However, there are innovative ways to reduce water consumption when growing marijuana or hemp plants.

How to Reduce Water Consumption During Cannabis Growth

In the modern era, regulated cannabis growers are working hard to cut down on water wastage. One tactic involves using different cultivation methods: 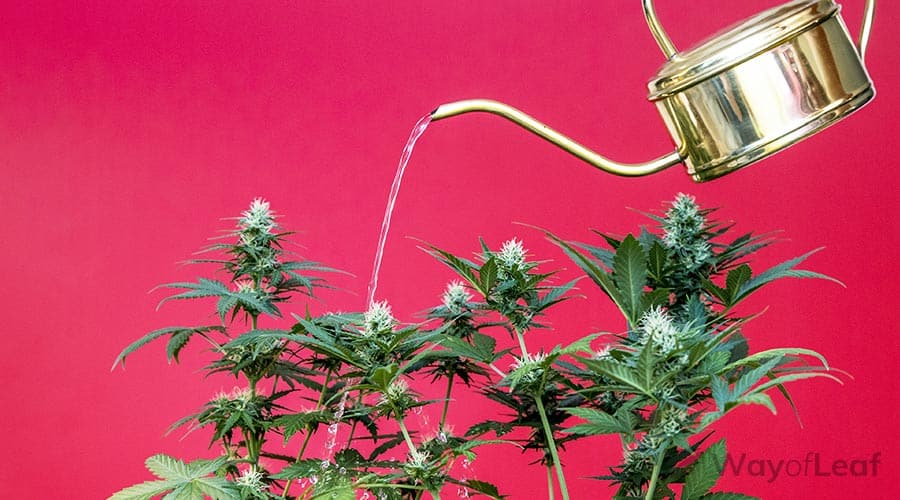 There are also other ways to conserve water and cut waste:

Overall, cannabis growers can conserve water in the following ways:

In addition to the water problem, there is also the issue of energy consumption. It isn’t unusual for those who grow cannabis indoors to have fans and lights operating 24/7.

The summer after Oregon legalized recreational weed, Pacific Power in Portland experienced seven blackouts traced to cannabis production facilities! In 2016, there was a 45% spike in Denver’s energy consumption. Again, it was linked to the marijuana cultivation sector.

A 2018 report by New Frontier Data painted a damning picture. It found that legal and illegal cannabis cultivation combined used over triple the electricity as the whole Starbucks Corp! At that time, the legal marijuana industry alone used 1.1 million megawatt-hours (MWh) a year. That’s enough to power over 92,000 homes. The report also outlined that energy usage in the sector would increase by 162% within five years.

How to make your grow greener…

At least 1% of the energy used in the United States is directed to the legal and illegal marijuana growing industries. This equated to 4.1 MWh in 2017. You can bet that energy consumption is much higher a few years on.

According to the Northwest Power and Conservation Council (NPCC), indoor commercial cannabis production consumes up to 3,000-kilowatt hours of energy per pound of weed. Burning through this amount of energy will cost you approximately $500, depending on your provider.

What Is the Solution?

One option is to utilize solar panels. This process would reduce the electricity used to power fans and other devices involved in a cannabis growing environment. Solar Power World claims that up to 50% of an entire grow operation’s energy usage is accounted for by exhaust fans, air ventilation, and dehumidifiers.

Apart from using solar power, here are some other tips:

It is also worth looking into the use of LED lighting. A significant number of growers still rely on High-Intensity Discharge (HID) lamps. While these give off lots of light for a low price, they can increase a grow room’s temperature by up to 30 degrees Fahrenheit!

Therefore, growers have to use dehumidifiers and air-conditioning units to keep the temperature under control. LED lighting is more expensive, to begin with, but will save you a significant amount of energy in the long term. They don’t burn hot and provide an impressive light spectrum for your plants.

Lastly, there is the question of packaging. Companies like Amazon have received criticism for including an excessive level of packaging with their products. It is also a severe issue in the cannabis industry. Although regulations vary, all states require child-proof packaging with marijuana-infused products.

This often involves sizable plastic prescription style bottles and large Mylar bags. To abide by legal standards, suppliers must also include extensive labeling. As a result, the packaging is usually far too big for the product.

What is the Solution?

Environmentally-friendly cannabis companies are working hard to solve this issue. Not long ago, Colorado began its ‘take-back’ program, which is specifically for vape cartridges, cannabis packaging, and other plastic materials customers got in dispensaries. The business then sterilizes and relabels the waste, so it is reusable.

Over in Canada, there is a concerted effort to reduce cannabis packaging waste. Regulations now allow peel-back style wrappers and labels. Also, suppliers are allowed to use materials other than plastics, such as cardboard.

We can potentially label environmentally friendly cannabis as products that conserve water, use as little energy as possible, and come in minimal or recyclable packaging.

One of the most obvious ways to make the marijuana industry ‘greener’ is by reducing water usage and wastage. This can involve innovative growing methods and systems designed to make the most out of every drop of water.

Cannabis cultivators can also take stock of their energy usage and perhaps invest in solar panels. Even without this renewable form of energy, you can drastically cut energy usage through the implementation of creative strategies.

Use timers for your different equipment indoors, and make sure you don’t have fans, humidifiers, or grow lights running for no reason.

Finally, manufacturers of cannabis products are trying to reduce packaging waste while still following legal guidelines. This is trickier and may require a nationwide drive designed to get consumers to return all recyclable packaging to dispensaries.

While the marijuana industry is making great strides, it has a long way to go to attain environmentally-friendly status. Whether it can ever truly make this claim is open for debate.

Every beginner grower needs to…