CBD Studies for Dogs: What Does Science Actually Say?

There is a lot of information on how cannabidiol (CBD), the most prominent non-intoxicating compound in marijuana and hemp, affects humans. When it comes to animals, especially dogs, the level of research is less detailed. Nonetheless, canine owners have no problem giving CBD to their faithful friends.

Things are changing in this regard, and a greater emphasis in recent years has been placed on studies relating to how CBD impacts dogs. This article looks at the most relevant research to date. We also outline existing guidelines on dosage.

Vets in most states cannot recommend or prescribe any cannabis-based product for your pet, regardless of their own opinion. Remember, all state veterinary boards adhere to federal guidelines, and cannabis is illegal federally.

That being said, some vets have taken matters into their own hands. According to the California Veterinary Medical Board, nothing in state law allows a vet to recommend, prescribe, or approve a cannabis product for treating an animal.

The safety and risks of giving CBD to a dog are not yet properly researched.

However, Dr. Gary Richter, an Oakland-based vet, created an online petition in 2017 designed to get a ‘compassionate care’ law created for animals in California. It authorizes vets to discuss the use of cannabis for sick animals, but they can’t prescribe it.

The bill eventually passed through California State Legislature and was signed into law on September 29, 2018. It has been in effect since January 1, 2019. It was the first bill of its kind in the United States (Colorado is the only other state that permits vets to discuss MMJ use in pets).

According to Dr. Richter, MMJ is potentially as useful in cats or dogs as it is in humans. While California vets have a little leeway, we can’t say the same in other states. Vets trying to prescribe cannabis to dogs in Alabama could end up in jail, for instance.

Still, the safety and risks of giving CBD to a dog are not yet properly researched. Potential side effects, based on what can happen with humans, include:

How Much CBD Should I Give My Dog?

Once again, there isn’t enough research to determine a specific amount that is likely to be therapeutic. Studies on marijuana’s toxicity in dogs reveal that as little as a milligram of cannabis per kilogram could poison canines. However, these findings are disputed, and it’s worth pointing out that CBD by itself is unlikely to cause the same issues.

Still, it is important to exercise caution when it comes to your pets. We have seen articles online that irresponsibly equate the use of CBD in humans with what happens in dogs. For example, a study by Bergamaschi et al., published in Current Drug Safety in September 2011, found that humans tolerated CBD doses of up to 1,500mg a day without ill effects. 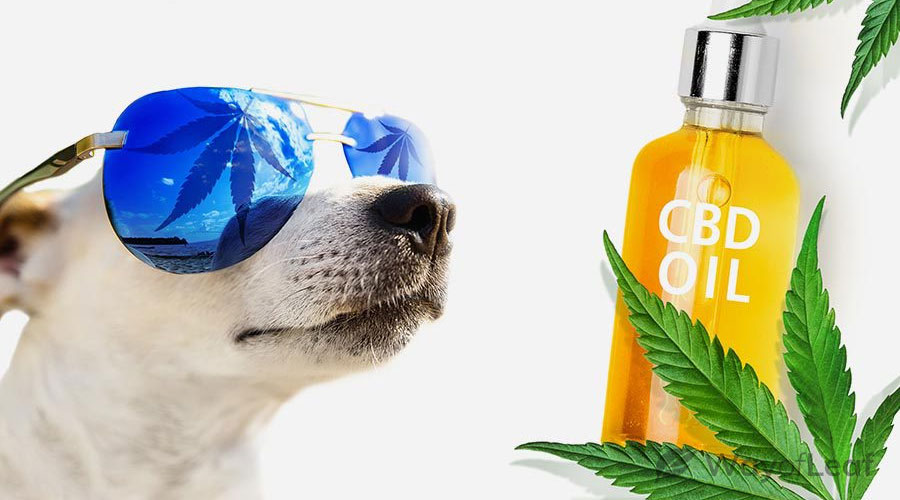 Of course, this means little (until we see clinical studies) when it comes to pets. According to Dr. Cornelia Wagner of Hawthorne Veterinary Clinic in Oregon, it is important to start any pet’s treatment with the lowest possible amount. In her opinion, stick to 0.05mg of CBD per kilogram of body weight, per day. For example, if your dog weighs 20kg (44 pounds), don’t give it more than 1mg of CBD in a day.

Also, make sure you monitor your pet and watch for negative side effects. These can include excessive excitement or sedation, vomiting, or disorientation. If you don’t see any of these effects, your pet potentially has a tolerance. In this instance, you could gradually increase the dosage every five days or so. Keep these increases to 0.05mg per kilogram a day.

Studies Regarding CBD & Dogs: What Do They Say?

CBD stores only recently started offering pet-specific products. However, research into its effects is older than many people realize. The main issue is the lack of clinical studies over the last few decades.

In 1988, a study by Mechoulam, Bialer, and Samara, published in the Drug Metabolism and Disposition journal, looked into the pharmacokinetics of CBD in dogs (pharmacokinetics refers to the movement of drugs within the body).

A group of canines received an oral CBD dose of 180mg and two IV doses of 45 mg and 90 mg, respectively. The cannabinoid was quickly distributed after IV administration, followed by a lengthy elimination. Interestingly, researchers didn’t detect CBD in the dogs’ plasma after oral administration in three of the six dogs studied.

Related article
What are CBD Treatibles, and are they Good for Your Pet?

CBD has become an incredibly p…

In the other three, the maximum bioavailability was just 19%. The conclusion was that CBD is barely absorbed after oral administration. The ‘first pass’ effect was likely responsible for the low absorption rate.

Another clinical study, published in Frontiers in Veterinary Science in July 2018, looked at the effects of hemp-based CBD on dogs with arthritis. Dogs received one of two treatments every 12 hours in the study: either 2mg of CBD per kilogram of body weight, or placebo oil. Each treatment lasted four weeks with a further ‘washout’ period of two weeks.

None of the dogs experienced any significant side effects. There was a significant decrease in pain, and an increase in activity, in 80% of the canines that consumed the CBD. The study concluded that 2mg per kilogram of CBD twice a day could help dogs with osteoarthritis. Interestingly, this dose is far higher than what is recommended by Dr. Wagner.

Dr. Stephanie McGrath works at Colorado State University. She has completed a pair of clinical studies on CBD’s effects in dogs with epilepsy, and dogs with osteoarthritis (OA). McGrath is located at the College of Veterinary Medicine & Biomedical Sciences at CSU. She had no interest in marijuana as a therapeutic drug until 2012.

In that year, cannabis became legal recreationally in Colorado. McGrath received many calls from people asking if CSU was conducting any research into marijuana’s medical effects. Eventually, she began studying the effects of cannabidiol on dogs with epilepsy and OA. The Applied Basic Science Corporation provided the CBD used in the research.

In her initial study, McGrath looked at 30 healthy dogs and found that they tolerated CBD in certain amounts. The results from the preliminary epilepsy study were promising. So much so that the American Kennel Club provided $350,000 worth of funding. This allowed McGrath to begin a three-year crossover study into how cannabidiol affects dogs with the condition.

A different study into how CBD affects dogs with OA was published in Pain in September 2020. This was a four-week study on 20 large dogs with OA. The canines received either a placebo or one of three CBD formulations.

Canines that used liposomal CBD or a high dose of the cannabinoid benefited from significant improvements.

At the end of the study, dogs that used a placebo or a low CBD oil dose showed minimal improvements. However, canines that used liposomal CBD or a high dose of the cannabinoid benefited from significant improvements in quality of life and mobility. Matthew Halpert, one of the study’s authors, admitted being surprised by how quickly the dogs’ health improved.

The canines continued showing improvements up to two weeks after their CBD intake ceased. Halpert believes this shows that the CBD was improving underlying inflammatory issues.

We have heard some remarkable reports about how CBD has changed the lives of pets for the better. For example, an old Staffordshire terrier had a 6cm mammary tumor and metastasis. Within three months of using CBD, the tumor vanished and has not returned since.

In another case, a Jack Russell Terrier had agonizing arthritis and a serious heart murmur. Within a month of using CBD, the murmur improved, and the dog was keen to go for walks.

Furthermore, we know that the list of potential benefits for CBD in humans is extensive:

All in all, preliminary research on CBD and dogs is promising. You may find it is worth giving your dog a small amount of CBD if it has a condition such as epilepsy, arthritis, or anxiety. However, we would urge caution and recommend stopping CBD treatment if your pet shows any negative side effects. Hopefully, ongoing research will shed more light on the puzzle. Until then, don’t take chances with your pet’s health!

Related article
CBD for Dogs: 3 Essential Things You Must Know

How, When, and Why CBD Got So Popular So Fast [Explained]

Will the trend continue?

How Many Types of Cannabis Are There? [The Correct Answer]

And what's the difference between them?

5 steps to help you kick the habit...