The alcoholic beverage industry has lobbied against the recreational legalization of cannabis from the very beginning. Colorado and Washington state both started selling adult-use marijuana in 2014. It was an act that threatened alcohol sellers. They believed that easier access to cannabis would hurt their profits. Let’s see if they were right to be concerned in this article.

We have different ways to relax. While some people like yoga and meditation, others prefer to drink alcohol or smoke marijuana to unwind. The alcoholic beverage industry is worth over $250 billion a year in the United States alone. Until recently, it didn’t have much competition.

However, the growing number of states legalizing adult-use cannabis is a clear and present danger. The National Beer Wholesalers Association (NBWA) represents almost 3,000 beer distributors across America. Its political action committee (PAC) is the licensed beverage industry’s most extensive.

It viewed cannabis as a problem many years ago. The NBWA began donating hundreds of thousands of dollars to anti-cannabis lobbying groups almost as soon as recreational cannabis sales began.

Like others in the industry, the NBWA fears that people will swap alcohol for cannabis. It is a concern based on scientific evidence. A study by the University of Colorado in 2012 found that legal medical marijuana resulted in a decreased level of alcohol consumption. Beer was one of the worst-hit beverages.

It was clear early on that recreational cannabis would only damage the alcohol industry even further.

At the beginning of recreational legalization, it seemed as if the alcohol industry’s worst fears were potentially exaggerated. A review of studies published in 2016 looked at the impacts of changing cannabis policies on alcohol use in America. The research team looked at over 750 studies. However, they focused on 15 that specifically looked at the links between cannabis and alcohol. 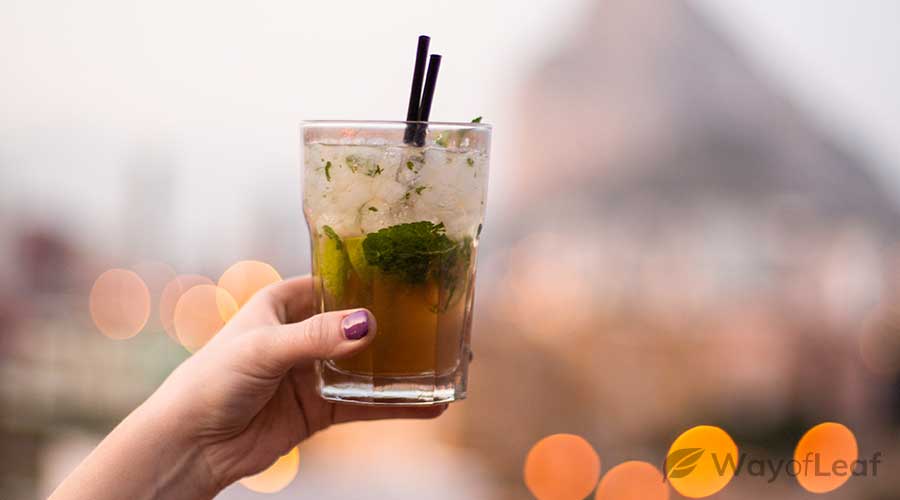 One of the aims was to determine if people would begin using cannabis as a ‘substitute’ for alcohol. They hypothesized that it might have positive benefits for the healthcare system and workplace productivity if it were the case. However, if legalizing cannabis led to an increase in the use of both drugs, it could have a significant negative impact on society.

The team found that the results from the studies varied significantly. Some studies discovered that states with MMJ dispensaries had higher alcohol and cannabis use rates. Other research found that legalized cannabis led to more binge drinking. However, it didn’t result in higher teenage drinking rates.

The NBWA’s Fears Are Realized

The issue with early research was a relative lack of data. This has changed in recent times. The number of adult-use cannabis states is now well into double digits. Meanwhile, more than two-thirds of states have a medical marijuana program. With several years of recreational use to look at, researchers have found far more concrete evidence. It isn’t good news for the alcohol industry.

That said, the Distilled Spirits Council released a report which gave a positive spin in January 2019. It looked at the impact of retail cannabis on alcohol sales. It focused on Colorado, Washington, and Oregon. According to the report:

However, research by the Institute for Operations Research and the Management Sciences in July 2019 painted a different picture. According to one of the study’s authors, the alcohol industry had good reason to be concerned about cannabis legalization. The researchers found that online searches of alcohol dropped by 11% from January 2014 to April 2017. This was across the United States, not just in states with recreational or medical marijuana.

A report by ICR Strategic Communications, called ‘The 2020 Cannabis Consumer,’ had further bad news. It discovered that approximately one-third of marijuana users reported consuming less alcohol since cannabis legalization. Almost half of the respondents admitted to preferring the effects of cannabis. Over 30% said they felt more in control when high versus when drunk.

Has Cannabis Led to a Decrease in Binge Drinking?

The CDC says binge drinking is a drinking pattern that brings a person’s blood-alcohol level (BAC) above 0.8g/dl. In general, this corresponds to a male having five alcoholic beverages in two hours or less. In women, it is the equivalent of four drinks across the same timeframe. According to the CDC, it is a serious but preventable issue. It seems as if the legalization of marijuana reduces the level of binge drinking.

Cowen & Co. is an investment firm. In 2016, it reported that binge drinking in recreational cannabis states was 9% below the national average. Moreover, it was 11% below the states where marijuana is illegal. At the time, Nevada and California hadn’t yet implemented their adult-use programs. The report anticipated that binge drinking rates would ultimately fall in both states.

Related article
Marijuana vs. Tobacco vs. Alcohol: A Comparison on Their Effects

Which is worst for your health…

Unsurprisingly, the researchers found that marijuana use in the previous 30 days was 18% higher than in states where it remained illegal. They also discovered that across 10 years, students in recreational cannabis states were 6% less likely to binge drink.

If You Can’t Beat Them, Join Them

Alcohol companies realize that marijuana is likely to impact sales negatively. They are also aware that cannabis’ momentum is growing. Therefore, rather than wasting money lobbying against the plant, some alcoholic beverage makers have invested in it.

Rather than wasting money lobbying against the plant, some alcoholic beverage makers have invested in it.

Several huge alcoholic beverage makers have combined with cannabis companies. In 2018, Molson Coors partnered with HEXO Corp, which was called Hydropothecary at the time. AB InBev linked up with Tilray, a Canadian marijuana company, in 2018. In 2017, Constellation Brands took a 9.9% stake in Canopy Growth. In May 2020, it increased its share to 38.6%.

In each case, the aim is to create marijuana-infused beverages. Cannabis and alcohol traditionally don’t mix well. However, each drink has a relatively low THC level and no more than moderate alcohol content.

Final Thoughts on How Marijuana Legalization is Impacting Alcohol Use

There is unquestionably a link between increased cannabis usage and a reduction in alcohol consumption. In states where recreational marijuana is legal, alcohol sales have fallen noticeably. One plus point is the significant drop in binge drinking. It is a practice linked to various health problems. Therefore, if cannabis legalization limits this form of alcohol consumption, it is a bonus.

After years of lobbying against cannabis legalization, some alcoholic beverage producers have changed tactics. They can see that the growth of the marijuana industry is unstoppable. Instead of swimming against the tide, they have decided to invest and make more money for their shareholders.

What is crossfading and should…

4
6 min read
Join the discussion
TOC
Premium
Your subscription has ended
If you love cannabis and appreciate our content, join WayofLeaf Premium today and receive:
Best of all, part of your membership fee will go towards helping to legalize cannabis.
Go Wayofleaf Premium
No thanks, I can't afford it
I already have an account
×
Login in to your premium account