If you dread ‘that time of the month’ because of the terrible pain that accompanies your menstrual cycle, you’re not alone. Data from the UN and the Simmons National Consumer Survey shows the prevalence of premenstrual syndrome (PMS). It found that almost 32 million women in the United States alone reported PMS or period pain in 2019. Other data shows that up to 90% of women experience menstrual pains.

It is no secret that the level of pain ranges from mild to crippling. Those who suffer from the latter understand that it has a severe effect on their lives. Despite the prevalence of the problem, however, it isn’t taken particularly seriously. There are treatments available, but most are basic and come with side effects. However, things are about to change thanks to a fantastic new treatment: Cannabis tampons!

What are Cannabis Tampons?

They are special tampons infused with marijuana! The idea is to absorb the weed into your body via the vagina. In theory, it works to remove the pain you feel during the menstrual cycle. It sounds like a fantastic innovation, but there are still a couple of problems that manufacturers must work out.

Few firms sell cannabis tampons. Foria has practically owned the market from the beginning. However, a new brand called Daye has started up and will soon offer CBD tampons. For an increasing number of women, these suppositories take the place of pain pills.

You insert them vaginally as you would with a tampon without an applicator. Most marijuana tampons include cocoa butter, hemp oil, and coconut oil in their list of ingredients. These allow the suppository to soften and melt in the body. From there, cannabinoids such as THC and CBD enter the bloodstream through the vagina’s mucosa. An increasing number of researchers have found that cannabinoids from weed and hemp impact the endocannabinoid system (ECS).

While the ECS is located throughout the body, it is most prevalent in our reproductive system. This includes the uterus, fallopian tubes, and ovaries. Perhaps this is why marijuana suppositories genuinely seem to help with pelvic pain. A cannabis tampon may reduce the inflammatory response and contractions of the uterus.

How Quickly Will These Hemp Tampons Work?

First and foremost, a person’s response to cannabinoids depends on their unique ECS. Therefore, what ‘works’ for one individual may not achieve a similar effect on someone else. However, even those who didn’t feel an impact when using a cannabis tampon for PMS have found another use. As cannabinoids could relax the muscles in the pelvic floor, it may reduce pain felt during penetrative sex. 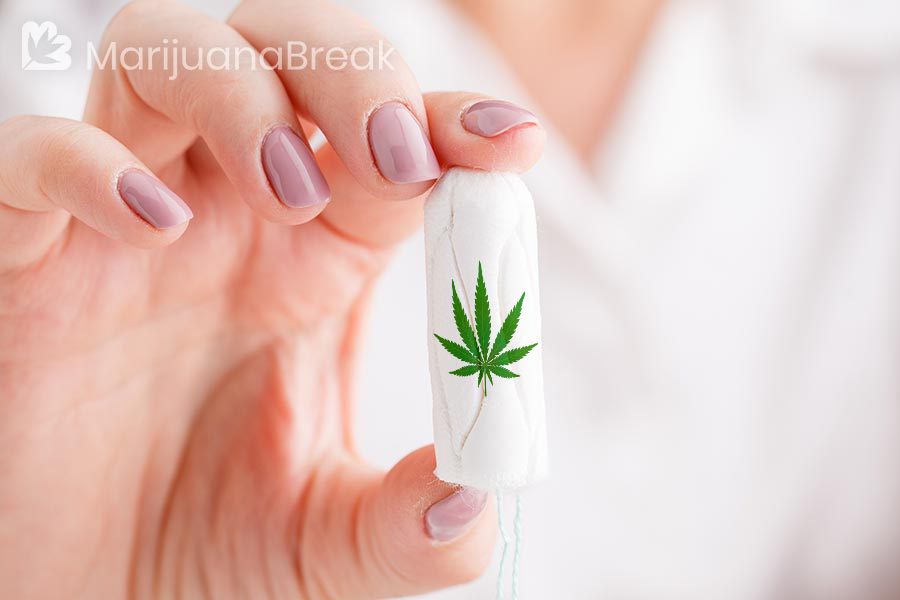 Foria Relief cannabis tampons are the biggest seller in the industry. However, they are not FDA-approved. There is no evidence of efficacy in the form of clinical trials. Staci Gruber of Harvard Medical School announced a plan to conduct an observational study of 400 women. They began using Foria’s Relief suppositories over several months back in 2018.

Each tampon contains 60mg of THC and 10mg of CBD. The women in the study were supposed to track menstrual symptoms to determine if Foria Relief is effective. It is the first step in a plan to ultimately conduct a clinical trial involving placebos. The results were slated for release last year, but we still (as of the time of writing) have not found any news in terms of statistical outcome.

If nothing else, the response to these CBD tampons is overwhelmingly positive. According to some customer reviews we read online, Foria’s hemp tampons began to relieve cramps in just eight minutes. One user even said the product left her feeling ‘decidedly dreamy.’ We’re not sure exactly what that means, but we’ll take it as good news!

Other users have suggested the CBD tampons work in around 20 minutes. They smell similar to cookie butter or cookie dough, which is yet another bonus. Moreover, according to Foria, you can use a traditional suppository with their cannabis tampons. Put in the Foria Relief tampon, keep it in for around 15 minutes, and then insert a ‘normal’ tampon.

The widely-recognized medicinal properties of the marijuana plant should provide hope to women with PMS. Until we get clinical evidence of cannabis tampons, however, don’t expect government approval.

Where to Buy CBD Tampons for Sale

“Won’t these cannabis tampons get me high?” The answer is no! Foria Relief’s ingredients include a CBD isolate that uses CO2-extracted cannabis oil and organic cocoa butter. Each tampon contains 60 mg of THC, which is a significant amount. However, the 10mg of CBD helps reduce any potential intoxicating effects of the THC. According to Foria, the ‘majority’ of users do NOT experience a psychoactive high.

Also, when you use these CBD tampons, the ingredients activate the pelvic region’s cannabinoid receptors.  The product ensures that the nerves in the ovaries, cervix, and uterus block cramp-induced pain. It is a unique delivery system whereby the cannabinoids go to where they are needed to relieve pain at the actual site.

While Foria reigns supreme in this limited niche, Daye has emerged as a possible contender. The UK-based brand offers CBD suppositories for those who don’t want to ingest THC. Each one contains a whopping 150mg of CBD. At present, it is a subscription-only service. Subscribers receive 12, 14, or 18 tampons via mail each month in the United Kingdom. The company has yet to finalize a pricing model.

Foria Wellness is a California-based startup. It offers its ‘Relief’ cannabis tampons in packs of four for $40. Unfortunately, their availability is limited. Foria Relief cannabis tampons were initially released in California and Colorado. You also needed a medical marijuana card to buy them. However, the MMJ card is no longer necessary in these states since weed became legal for recreational use.

You can buy the CBD tampons, but we were astonished to find several vendors were sold out of Foria Relief! Prospective customers face a significant problem. United States federal law doesn’t allow the transport of THC products across state lines. This is even the case between states where it is legal for recreational use.

As a result, Foria sells it at a select group of vendors in physical stores. Only residents of Colorado or California can buy cannabis tampons at present. In these states, you can purchase the cannabis tampons in recreational dispensaries (if aged 21 or over).

I Don’t Live in Colorado or California … How Do I Get Hemp Tampons!?

If you don’t live in Colorado or California, you can’t legally buy Foria Relief CBD tampons. However, you can try to make them at home!

You can replicate the Foria recipe by using 0.5 cups of Cocoa Butter, and 0.25 cups of Coconut Oil. Add in 1 gram of concentrate weed (or approximately 5 grams of raw bud). Place the marijuana plant in boiling water to clean and sterilize it, strain the pot, and dry it.

Next, heat the finely ground matter to around 225 degrees Fahrenheit. At this temperature, the inactive THCA is converted to the active THC. Make sure you cover the material when heating it above the boiling point, though. Otherwise, you will reduce the potency. Also, make sure you remain below 350 degrees Fahrenheit or risk boiling the cannabinoids to the point of ineffectiveness.

After you’ve done this, place the coconut oil in a clean container (preferably a mason jar) seal it, and place it in warm water for 60 minutes. Cool the container to room temperature first and then put it in the freezer overnight. If using raw weed, defrost, and place in hot water again before straining. This process is unnecessary if using hash or BHO concentrate.

Melt the cocoa butter in a microwave until it has a liquid texture. Be careful not to leave it in too long! After you add the coconut oil and stir the mixture, take an ice cube tray (or another kind of mold) and pour in the liquid. Wait for it to cool and set before using it. Ideally, you will use one of these homemade cannabis tampons internally then add another one externally on the abdomen. While you’re using weed, the THC dose is so low per tampon that you’re in no danger of getting high.

Within the bounds of reason, there isn’t much that a woman wouldn’t do to find relief during a particularly painful menstrual cycle. The pain is usually crippling and is sometimes so bad that you call in sick to work. The CBD tampons offered by Foria are a real life-saver for women that have excruciatingly painful periods.

The cannabinoids in weed work wonderfully with your ECS. When the cannabis tampons touch your skin, its ingredients make their way directly to where they are needed the most. Pain relief usually lasts for well over an hour, and it starts to work within minutes. If you’re not lucky enough to live in Colorado or California, don’t despair! You can try to make hemp tampons by following the instructions above.

Is it that time of the month a…

How to Get High and Orgasm Without Even Touching Yourself

8
5 min read
Join the discussion
TOC
Premium
Your subscription has ended
If you love cannabis and want to support our site, join WayofLeaf Premium today and unlock
Best of all, part of your membership fee will go towards supporting the fight to legalize cannabis.
Sign Up for WoL Premium
Not now
I already have an account
×
Log in to Your Premium Account