We know that the universe works in mysterious ways, and some say that it has a way of ‘righting’ things over time. In the case of Tommy Chong, it took only two years to counter the abomination that was Reefer Madness. That was the length of time between the release of the infamous anti-cannabis movie, and the birth of the great marijuana crusader Chong.

Best known as one half of legendary stoner comedy duo, Cheech & Chong, he has long been an icon to marijuana enthusiasts. Though he was born in Canada, Chong became a naturalized American citizen in the 1980s. His is a life filled with weed, fun, and more controversy than most.

Being a cannabis advocate in the 1960s and 1970s meant that you had a ‘bullseye’ on your back as law enforcement targeted you. Oddly enough, Chong mainly avoided legal issues during his heyday, unlike the previous Cannabis Kingpins on this list. Instead, he faced trouble for his marijuana-loving ways in the relative twilight of his life. Now in his eighties, Tommy Chong continues to profess his love of weed and hasn’t yet stepped out of the limelight.

Tommy Chong was born in Montreal on May 24, 1938, to a Chinese father and a mother with Scottish-Irish heritage. His dad, Stanley, emigrated to Canada earlier in that decade. In The I Chong, released in 2006, Tommy wrote about how the country was still suffering from the Great Depression. After a failed attempt to make a living from a turkey farm, the Chongs moved to the city.

While he was still a child, Chong contracted pleurisy. At the same time, his mother had TB, and his father was in a veteran’s hospital! He ended up in a Salvation Army Booth Memorial Home, which was designed for abandoned, orphaned, and abused children. Upon his ‘release,’ the family moved into a little cottage where they lived for seven years.

Chong recounts the immense level of racism he encountered and lived amongst as a child in Calgary. Racial epithets were included as part of casual everyday conversation. As a boy, he remembered not getting an invite to a birthday party. He was omitted because the birthday girl’s father was concerned that she would end up with a black or Chinese guy.

By the time he was a teenager, all signs had already pointed towards Tommy Chong not having a ‘conventional’ life.

By the time he was a teenager, all signs had already pointed towards Tommy Chong not having a ‘conventional’ life. He dropped out of high school at the age of 17, though he believes the school was about to expel him anyway. Chong amusingly recounts realizing that ‘music could get you laid.’ As a result, he learned how to play guitar and was good enough at it to start making money.

In an interview, Chong said a jazz musician gave him a Lenny Bruce (a legendary, controversial comedian) record and a joint. According to Chong, this single event changed his life. He quit school around a week later to travel as a blues musician. Eventually, he would become a globally famous comedian.

Chong formed part of a group called ‘The Shades’ in 1956. It was a soul music group that started in Calgary. It got its name from the diverse racial mix of the band. After a move to Vancouver, the group changed its name to Little Daddy & the Bachelors but separated soon after. In 1963, Chong opened a nightclub in the city, which he amusingly named ‘Blue Balls.’ Several band members reformed as ‘Four N’s and a C’ before changing the name once again, this time to Bobby Taylor & the Vancouvers.

Related article
Are Indica or Sativa Strains Better When Listening to Music?

Something to suit every taste…

Finally, Chong enjoyed a brief flirtation with success as the band had three Billboard Hot 100 singles in 1968. ‘Does Your Mama Know About Me’ peaked at #29, and was the band’s biggest hit. Despite limited success, the group was influential in its own way. They played with a young Jimi Hendrix. The Jackson Five also opened for the band during a 1968 show. According to Chong, he ‘okayed’ a contract offered by Motown to the Jacksons. He recounted how he was the ‘whitest’ guy they knew, so they asked him for his opinion!

The fun came to an end when Chong and a bandmate were fired for arriving late to a gig. Even though Berry Gordy of Motown said it was a mistake, Chong decided that he didn’t want to return. He wanted to become a Berry Gordy rather than merely working for one. After receiving $5,000 in severance, Chong went in another direction, one that defined his life.

In the late 1960s, Chong met Richard ‘Cheech’ Marin in Vancouver. Marin moved there from Southern California in a bid to avoid the Vietnam War draft. The duo hit it off immediately and began performing stand up shows. It was the beginning of a partnership that lasted almost 20 years and spawned numerous movies and comedy albums. They spent most of the 1970s recording albums and starring in low-budget films.

Cheech & Chong became synonymous with marijuana use on an extreme scale. They lit up enormous spliffs and even smoked Labrador poo in one of their films! The duo’s Hey Margaret sketch was indicative of their ‘pushing the boundaries of bad taste’ comedy style.

In the skit, a husband describes a pornography movie to his wife. In it, an old woman has sex with the pizza delivery guy, and then with a dog! The husband is a little too keen in his reporting of the sordid scenario. Finally, the lady in the movie has sex with a ‘god-damned colored guy,’ and the man stops watching the film in a sickened state.

According to Chong, the comedy duo was so successful because they communicated with people. Fans would get stoned, watch Cheech & Chong act crazy, and have a great time. He also comprehensively rebuffed any suggestion that being high was ‘an act.’ He confirmed that they were stoned during virtually every performance because “that was part of the job.” Chong went further by claiming drugs were essential to the creative process. Aside from cannabis, he took acid and cocaine. 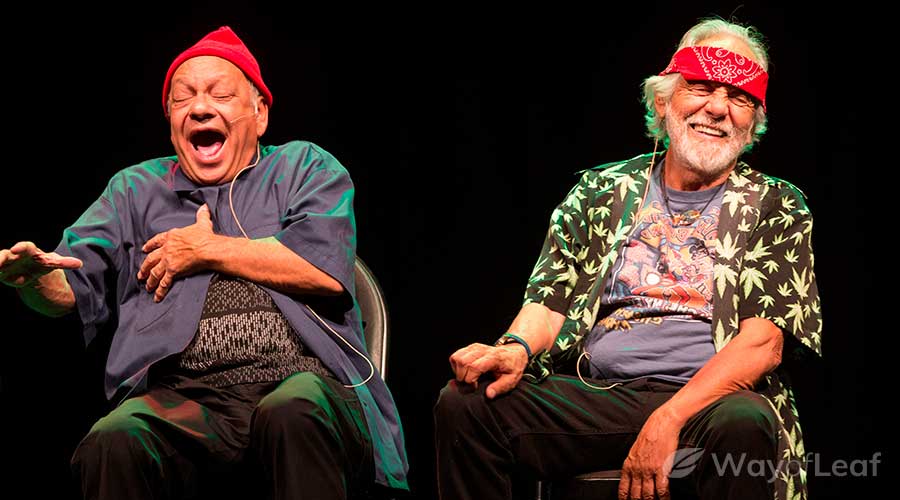 Up in Smoke was their debut mainstream movie in 1978 and a huge hit. In the film, the two stoners become accidentally embroiled in a plot to smuggle a van made of fiberweed from Mexico to Los Angeles. Despite a low budget of $2 million, Up in Smoke was a box office success, earning over $44 million. More than forty years later, it remains a classic in the genre. The movie spawned a pair of sequels, which also performed well. Subsequent films were less successful as perhaps the ‘stoner shtick’ wore thin during the ‘Greed is Good’ era.

After years of tremendous success, Cheech & Chong suddenly split up in 1985. The main reason given was that Marin wanted to forge a solo career. It was an acrimonious split, and the two former friends didn’t speak to one another for years. They occasionally reconvened for a project, though tension was never far away. The breakdown of their relationship was best illustrated in 2000. They both voiced characters in the same South Park episode but were recorded separately.

In 2008, Tommy’s son, Paris, intervened. Marin sent an email to Chong asking to put aside past differences. Paris saw it, wrote ‘yes,’ and hit ‘reply.’ His father was thrilled when Paris told him, and now, Cheech & Chong have rekindled their friendship.

Trouble with the Law

Chong spent the 1990s occasionally working, with the movie, Far Out Man, one of his more important projects. He later earned a starring role in That 70’s Show as an aging hippie. After decades of drug use and cannabis advocacy, it is remarkable that Chong avoided legal problems. However, his luck changed in 2003 when he was arrested for selling drug paraphernalia such as bongs via his company, Chong Glass/Nice Dreams. Incidentally, his son, Paris, founded the organization.

In exchange for allowing his wife and son to avoid charges, Chong cooperated with the government. The entire episode was part of two investigations called Operation Pipe Dreams and Operation Headhunter. Chong was the first of the Pipe Dreams defendants to plead guilty. He received a nine-month prison sentence, which he served in Taft Correctional Institution from October 2003 to July 2004. Oddly enough, he shared a cell with Jordan Belfort, ‘The Wolf of Wall Street.’

There was a suggestion that Chong’s celebrity status worked against him. He was the only person in the investigation (out of 55) who received jail time despite having no previous convictions. It is claimed that Chong encouraged Belfort to write his memoirs, and the duo remain friends. The I Chong focused primarily on his time in prison.

In 2008, Cheech & Chong began touring once again and appeared on The Howard Stern Show, among others. They also hosted a WWE event, starred in an episode of The Simpsons, and in Dancing with the Stars. Throughout everything, Chong remained a staunch marijuana activist. He sits on the NORML advisory board and contributes to Cannabis Culture Magazine regularly.

Throughout everything, Chong remained a staunch marijuana activist.

In 2012, Chong announced that he was in a fight against prostate cancer. Fortunately, it was a slow stage one type, and he was able to defeat it. According to Chong, he had been free from drugs for three years. He believes cancer appeared during this period of sobriety! On Twitter, Chong said the hemp oil he used helped treat his cancer. However, three years later, he stated that he now had colorectal cancer. True to form, Chong also said he was “using cannabis like crazy’ to fight it!

For many marijuana users, Tommy Chong is more than a cult figure that starred in some funny stoner movies. He is a civil-rights hero who has always done things his way. These days, Chong continues to have a significant presence in the weed world. He says it is a ‘disgrace’ that cannabis is separated into recreational and medical. Chong suggests it is little more than a way of grabbing more tax money.

There is also a suggestion that the government targeted him in 2003 because of the way he mocked them in his films. Aside from potential medical effects, Chong is adamant that cannabis helped him get through his cancer battles. At the time of writing, Tommy Chong continues to work in his eighties. He appeared in a recent sci-fi/horror film called Out of Space. He still performs gigs with Marin, and Chong’s wife, Shelby, is their opening act!

In an April 2020 interview, Chong remained coy when asked about the possibility of one last Cheech & Chong movie. It would be the fitting end to a great career and one more thing to add to the legacy of one of marijuana’s biggest champions.