Cannabis Degree Programs: The Best Picks for Landing a Jobs

What you may NOT be aware of is how the growth of the industry is shaping the career prospects of tens of thousands of Americans. ‘Matriculating in marijuana’ is more prevalent than you may think because there are genuine ‘degrees in weed’ that pave the way to real-world employment.

Although degrees in marketing, biology, and health care can set you up for a career in cannabis, it is now possible to complete a cannabis degree at a legitimate university. According to CNBC, students can walk into a job worth $70,000 immediately after completing a cannabis degree program. In this article, we look at five of the best institutions offering cannabis degrees.

This cleverly named university is in Oakland, California, and has a horticulture program which covers everything you need to know about cultivating marijuana. From seed to harvest, this course has you covered. There is also a detailed business program entitled ‘CannaBusiness’ which teaches students how to start a marijuana business and ensure they are operating within the law.

If you think it’s an ‘easy’ degree, think again! There are 18 courses to choose from in the CannaBusiness program alone, including Horticulture 101: Growing Safely and Responsibly, Science of Cannabis, and Budtender & Patient Relations.

You can enroll on the official Oaksterdam University site. According to the institution, the only requirements are that you pay your tuition and are aged 18+. Semester classes are held once a week, while there are seminar classes on four consecutive days each week. There are a host of fees aside from the cost of tuition including a $50 fee for reissuing a certificate.

The 14-week Cannabis and Horticulture Semesters are the longest courses and cost $1,595 and $1,895 respectively. There are also basic CannaBusiness Seminars which last two days and range from Basic to Advanced; each one costs $695. About 20% of students are international and over half of them are from outside of the state of California.

FGCU recently announced its intention to introduce a cannabis studies degree program. The goal is to take a scientific look at marijuana to ensure that the upcoming generation can determine the good, bad, and ugly aspects of the herb. There was an initial marijuana class which received an overwhelmingly positive review from students who were upset that it came to an end!

As of this year, FGCU students can now major in an integrated study with a focus on marijuana studies. As Dr. Martha Rosenthal of the university points out, it is an educational course, and the institution is NOT encouraging drug use, nor are students ‘majoring in marijuana’.

The program will consist of six specialized cannabis courses, as part of a general education class program. Graduates will be able to build relationships in the legal marijuana industry and perhaps gain employment.

Also known as TI, this institution was created in Denver in 2014 to help improve the public’s knowledge of marijuana. It offers a Cannabis Products & Sales Training program (CPST) which uses certified medical science to inform sales reps about the herb. The course costs just $199 and goes a long to decreasing public health risks, boosting dispensary staff training, and increasing sales.

The Trichome Institute has a wide range of inexpensive courses to help you understand the herb, including:

In the latter course, you learn all about hash; including its history, uses, and how to dab safely. Although it lacks the ‘degree’ status of Oaksterdam University, it is a cheap and easy way to see if your interest in marijuana is genuine or a phase.

At this institution’s Larner College of Medicine, students now have the option to study various weed-related courses in the university’s Cannabis Science and Medicine program. It is primarily aimed at prospective medical professionals in a bid to help them study up-to-date research into the clinical applications of marijuana. Courses include:

Students have the option of paying for individual modules including:

For the record, each module works out at $100 an hour. The seven-week course costs $2,250 and to qualify you need to be 18+ years of age, have a Bachelor’s degree, and have finished a college-level foundational course in both Chemistry and Biology.

NMU is offering one of the most detailed weed-related degree programs in the United States. Now, you can earn a degree in Medicinal Plant Chemistry which includes material on horticulture, marketing, biology, chemistry, and financial management. Within this major, there are also a few specific tracks, including one with a bio-analytical focus.

The versatility of this degree course is one of its biggest selling points. Even if you don’t move into the marijuana industry, the knowledge you gain will enable you to work in one of several industries. Not many people understand biology, accountancy, and chemistry! A total of 120 credits is required for this degree, and you need at least a ‘C’ in a chemistry course to apply for the medicinal plant chemistry major.

Within two years of its formation, the Medicinal Plant Chemistry attracted enrolment of 230 students. If you fancy taking the trip to Michigan to learn, bear in mind that the average first-year cost at NMU is over $16,000; a figure that falls to $10,000 for in-state pupils. 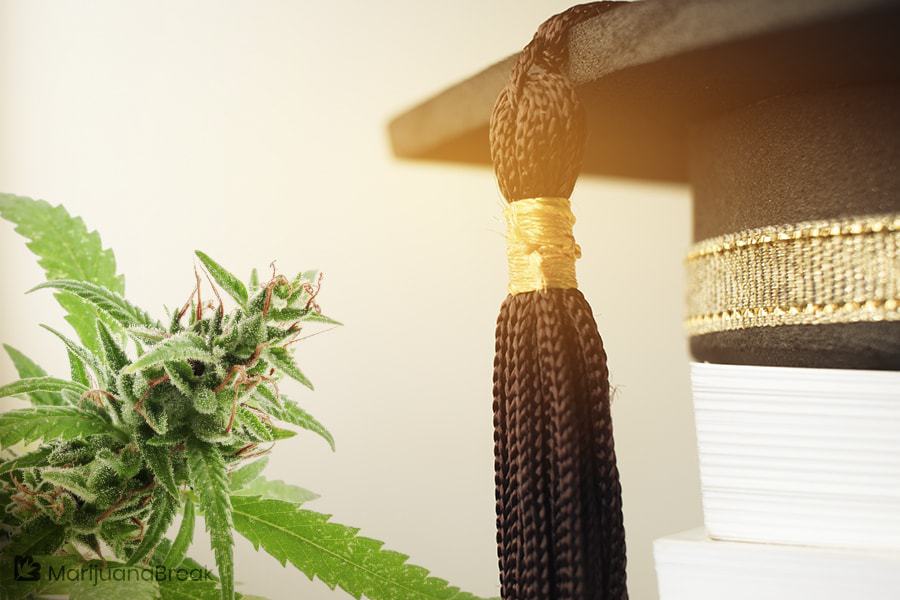 Finally, the stoner’s dream of earning a degree in weed has become a reality. Alas, you have zero chance of graduating if you adopt the stereotypical ‘stoner’ work ethic. These are hard courses, and you will only make the grade if you consistently work hard. One of the most impressive aspects of these degree courses is that they teach students real-world skills.

Even if they don’t enter the weed industry, having financial management ability, and knowledge of biology and chemistry will place graduates in a strong position in the job market.

The number of colleges offering a marijuana qualification is growing exponentially. At the University of California-Davis, there is a program that educates students on the risks and benefits of weed. At Stockton University, you can now earn a minor in Cannabis Studies with required classes on Cannabis Law and Medicinal Cannabis.

Going to university in the United States is an expensive business. An estimated 70% of American students graduate with significant loans, with the average borrower now in debt to the tune of $37,000. Those who would mock a degree in cannabis have clearly not taken a clear look at the college degree scene. Did you know that having a degree in Culinary Arts only earns you 2-11% more per annum than non-graduates when working as a chef?

Degrees such as Performing Arts, Fine Art, and Communications often don’t pay their way. In contrast, a cannabis degree could lead to a lucrative career in the marijuana industry. After all, how many college degrees help you earn up to $70,000 per annum in your first year or two after graduating?

Related Articles
CBD and Cannabis Laws in Idaho: All You Need to Know

0
6 min read
Does Cannabis Cause Bronchitis? [Revealing the Truth]

5
3 min read
How Many States Is Recreational Marijuana Legal In?

0
3 min read
The Difference Between a Joint, a Blunt, and a Spliff