Welcome to the latest round of legislative meanderings concerning marijuana and CBD! Those familiar with the complexities of these laws are doubtless saying “not again” as they light a joint to relax their frayed nerves. Of course, only residents of 11 states plus Washington, D.C., can do this without an MMJ card. Even in some of those locations, recreational cannabis isn’t yet for sale!

Then there are the other 22 states that have medical marijuana programs. Again, a handful has yet to implement the program in any meaningful way. As for CBD, the rules surrounding it are the stuff of migraine headaches. Like cannabis itself, the compound, CBD, isn’t federally legal. However, hemp that contains CBD, is!

The 2018 Farm Bill led us to the current merry-go-round of confusion, consternation, and condemnation. You see, each state is allowed to make rules regarding cannabidiol. Few of them have provided any clarity whatsoever. We have a truly bizarre situation where marijuana is recreationally legal, but CBD is technically illegal in at least one state (we’re looking at you, California).

With CBD at the whims of state and even local lawmakers, things are getting messy. At Wayofleaf, we continue to delve into the cannabidiol labyrinth, in the hope we don’t run into the minotaur! Today, we take a look at Wyoming and see if cannabis and CBD are legal in that state. At least on this occasion, the rules are somewhat clear!

In a nutshell, heck no! Wyoming has among the strictest anti-marijuana stances in the United States. There is disagreement over when the state first banned the plant. In the Pursuit of Oblivion: A Social History of Drugs, Richard Davenport-Hines suggests prohibition occurred in 1929. However, in The SAGE Encyclopedia of Pharmacology and Society, Sarah E Boslaugh writes that the ban happened in 1913.

Either way, Wyoming has remained firmly against cannabis ever since. In 2015, the Wyoming chapter of NORML gained signatures to get MMJ on the 2016 ballot. However, the state’s ballot initiative requirements are among the toughest in the nation. In the state’s House of Representatives, legislation to decriminalize marijuana has failed several times. 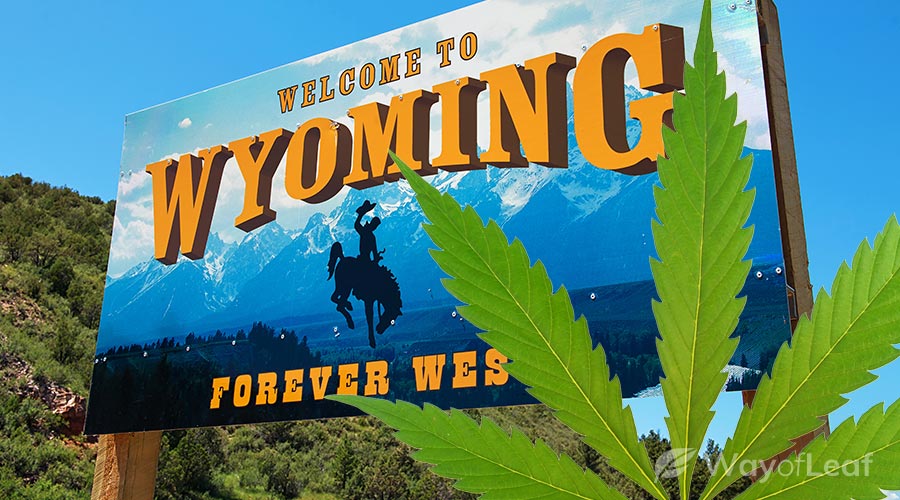 This is despite a 2014 poll showing that 72% of the population supported the use of marijuana if approved by a doctor. A survey from 2016 showed that MMJ support had increased to 81%. An even more recent poll put the percentage in favor at 86%! Alas, there was no movement in the state legislature when it adjourned its session in the first half of 2020.

At present, without decriminalization, there are strict penalties in play. Being caught ‘under the influence’ of cannabis is a misdemeanor in Wyoming! It comes with a potential jail term of six months. Possession of less than three ounces is also a misdemeanor but has a possible prison sentence of up to a year. Possession of over three ounces is a felony, and you could spend up to five years in jail. Sale of any amount is a more serious felony, and comes with a maximum sentence of ten years!

According to a 2018 ACLU report, African-Americans in Wyoming are 5.2 times more likely to get arrested for marijuana possession. This is despite a similar rate of usage.

What Is the Situation with CBD in Wyoming?

It is better news on the CBD front, though even that is only a recent development. For a very long time, the state of Wyoming resisted any attempts to legalize CBD for any reason. That changed in 2015 when a law took effect and allowed the use of CBD oil to treat seizures. At that point, you were not legally permitted to use it for any other reason. It was an incredibly narrow law with no in-state access.

At the time, you could only apply through the Wyoming Department of Health (WDH). You could use medical CBD after a doctor prescribed it to treat seizures caused by epilepsy. You needed to apply for a Hemp Extract Registration Card. It cost $150 and required annual renewal, just like MMJ cards in other states.

Even those with intractable epilepsy could only use CBD oil with a maximum THC content of 0.3%. It was also necessary to register with the Hemp Extract Registry!

The above was an awful lot of trouble to go to just to use CBD oil! After years of procrastination, the state legislature finally acted. On March 6, 2019, the state enacted HB0171. Republican Governor, Mark Gordon, signed it into law. It resulted in the end of the Hemp Extract Registry and changed the CBD industry in Wyoming for the better.

HB0171 made the Wyoming Department of Agriculture the rulemaking authority for the production and regulation of hemp. The bill came around three months after the American President signed the Farm Bill into law. After years of fighting against cannabidiol, the bill passed through with ease. The House voted 56-3 in favor, and the Senate also voted heavily in favor, 26-3.

What the act did was to remove hemp from the Wyoming Controlled Substances Act. Crucially, it also removed CBD. This is something that the Farm Bill did not do, and would frankly have alleviated a lot of confusion if it had.

Therefore, Wyoming residents can freely purchase CBD oil in their state, as long as it comes from hemp, and has less than 0.3% THC. However, please remember that the FDA maintains regulatory authority once hemp-derived CBD products are sold across state lines. If you use any marijuana product or anything with more than 0.3% THC, you are at risk of one of Wyoming’s strict penalties.

Does Wyoming Have an Industrial Hemp Program?

Yes. It is a significant part of HB0171. The Farm Bill permits industrial hemp cultivation throughout the United States. However, each state must submit a plan for approval. Wyoming did so in January 2020 and received good news within a few weeks. The United States Department of Agriculture (USDA) approved the Wyoming hemp regulatory plan. It granted authority to the WDA to regulate the Wyoming hemp industry.

The next step for the WDA was to implement emergency rules, which will remain in place for 120 days. During this period, the WDA aims to go through the standard rule promulgation process. This includes a public comment period and a final rule. At the time, the WDA Director, Doug Miyamoto, said hemp was a new crop with the attached inherent risks.

In the meantime, Wyoming farmers have come together to learn more about hemp. The state certainly has advantageous climate conditions for the crop. Justin Loeffler is part of the GreenTree Ag LLC and believes the short growing season is a huge help. His company planted 11 varieties of hemp in Colorado on 60 acres of land. They selected an area of the state with similar climate conditions to Wyoming. It hopes to learn enough to help farmers combat the challenges they are sure to face.

A considerable majority of the hemp grown in the United States is for the CBD industry. It is potentially an enormous cash crop, and it is no surprise to learn that thousands of farmers want to try. However, there are also plenty of risks attached. Issues like cross-pollination, flooding, and pests can all damage a crop. Also, farmers that produce hemp with more than 0.3% THC will see their plants destroyed.

Final Thoughts on CBD and Cannabis Laws in Wyoming

The prohibition on marijuana in Wyoming has lasted for more than a century. Unfortunately, it doesn’t seem likely to change anytime soon. At present, it is one of 17 states with no MMJ program. With various attempts to bring an MMJ bill to the legislature failing, we fear it will be several years before Wyoming makes a serious effort at permitting cannabis. This is despite the overwhelming majority of state residents saying they support MMJ!

At least Wyoming now allows the sale, possession, and use of CBD. However, this process also took several years, and only came into effect in 2019. Residents can now use hemp-derived CBD with a maximum of 0.3% THC, without a doctor’s prescription. The Wyoming hemp industry will start in earnest this year. It is interesting to see how many farmers try to make the most out of this promising cash crop. Even if it doesn’t make the CBD market, there are a ton of other uses for hemp!

Cannabis Concentrate Emulsifier: How Does It Work and What Even Is It?

The Best Marijuana Drinks to Try in 2021

Are marijuana-infused drinks really the next big thing?