Can I Become a Cannabis Patient if I Own a Gun?

Medical marijuana has enjoyed a massive surge in popularity in recent years. Proponents believe it is beneficial for a myriad of different conditions. These include chronic pain, nausea, appetite disorders, anxiety, PTSD, and epilepsy. A wealth of clinical research supports these assertions.

There is also a significant turnaround in public opinion, as well as the law. A recent survey by the Pew Research Centre shows that 67% of Americans support marijuana legalization. Patients in 33 states plus D.C. now have access to marijuana if they have an MMJ card. Additionally, recreational weed is now legal in 11 states plus D.C.

The growing trend of cannabis legality has caused people to question how becoming a patient may affect their constitutional rights. One such question is how having a medical marijuana card could impact the Second Amendment, “the right of the people to keep and bear arms.”

The simple answer to whether you can be a medical marijuana patient and own a gun is no. However, like so many questions in the wonderful world of weed, the situation is a little more complicated than it first seems.

Let’s take a closer look at the law surrounding guns and medical marijuana, and what they mean for those wanting the best of both worlds.

Although many states have legalized medical marijuana, it remains a Schedule I controlled substance and is still illegal at a federal level. The DEA defines a Schedule I substance as having “a high potential for abuse and little or no medicinal value.”

In recent years, marijuana supporters have repeatedly called for the reclassification of the drug. Recent advances mean that it may not be long before marijuana is removed from the Schedule I list. However, for now, it remains firmly in place alongside harder narcotics such as heroin, LSD, and MDMA. Interestingly, industrial hemp is no longer a Schedule I substance and is no longer tied-in with cannabis.

Because of its Schedule I status, the DEA classifies anyone who uses weed as an ‘unlawful user.’ This is the case even if you live in a ‘legal’ cannabis state.

What Does the Law Say About Medical Marijuana and Guns?

Anyone wishing to purchase a gun from a licensed seller must complete a Firearms Transaction Record (Form). You receive it from the Bureau of Alcohol, Tobacco, Firearms, and Explosives (ATF).

Section 11.e of this form asks you to disclose whether you unlawfully use marijuana or any other controlled substances. It then goes on to clarify that marijuana possession remains federally illegal, regardless of the laws of your state. Filling in this form incorrectly or untruthfully is classed as perjury. This is a felony punishable by up to ten years in prison.

The ATF confirmed its stance on guns and marijuana back in 2011 when it issued an open letter to all firearms dealers. The letter reiterated that anyone known or suspected to be an “unlawful user of or addicted to any controlled substance” is not allowed to purchase or possess a firearm or ammunition. For clarification purposes, both the Gun Control Act of 1968, and United States Code Title 18, Section 922(g) are against you.

The law on the subject of cannabis and guns was made quite clear by the ATF, to both dealers and buyers alike. However, not everyone accepted it.

The Case of Wilson vs. Lynch

Shortly after the ATF issued its open letter, Nevada resident S. Rowan Wilson decided to purchase a gun for self-defense. However, when she visited her local firearms dealer Loretta E. Lynch, she was promptly turned down. Lynch happened to know that Wilson was a medical marijuana cardholder and, naturally, wanted to comply with the law.

Wilson was unhappy about this and decided to file a lawsuit against Lynch. She claimed that the refusal violated her Second Amendment rights (among others). Perhaps unsurprisingly, the case was dismissed, but Wilson did not give up. The case finally reached the U.S. Court of Appeals for the Ninth Circuit after two failed appeals. Alas, Rowan, lost her fight.

The court ruled that Wilson’s Second Amendment rights were not violated. It reached this decision due to an earlier ruling (from the case of United States vs. Dugan). That particular case ruled that unlawful drug users did not retain their Second Amendment rights. The appeal panel justified their decision further, citing the government’s priorities of preventing violent crime.

That’s right. Despite a growing acceptance of cannabis and its potential benefits, there too many people that associate the drug with an increased risk of violent crime.

Does Marijuana Cause Violent Crime? 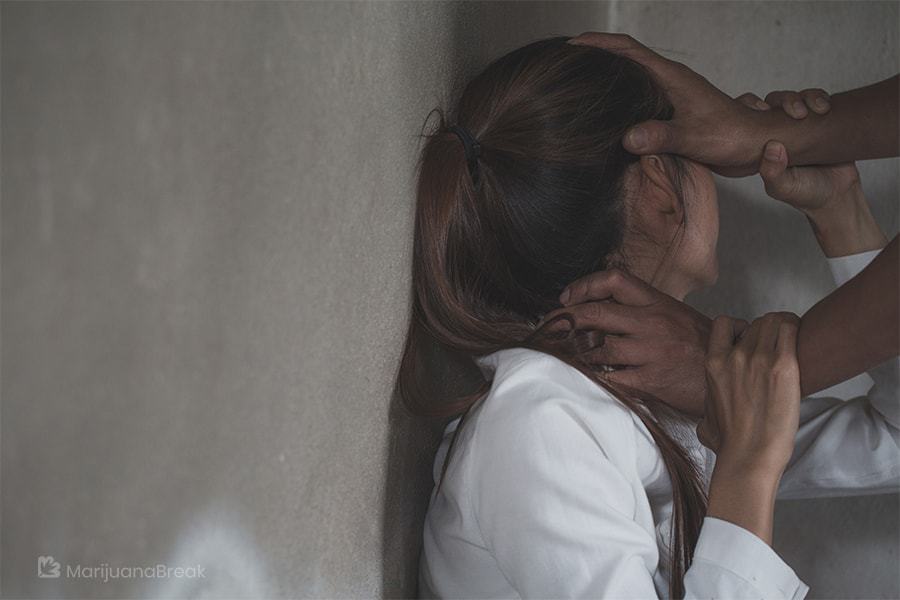 Cannabis has had a bad reputation since its prohibition and demonization in the early 20th century. Those who still oppose it claim that it increases the risk of violent or aggressive behavior. They also claim weed is a ‘gateway drug’ to more harmful substances.

Most pot-smokers find it challenging to reconcile this image with their lifestyles. The vast majority of those who use weed do so to relax rather than set out on a drug-fueled crime spree!

Of course, there are always exceptions, and one common example is cannabis use and gangs. Gang members are often involved in violent crime, and may also use marijuana or other illegal substances. But is weed responsible for these crimes, or is the link just a coincidence?

When it comes to finding research as to whether marijuana leads to violence, the evidence is as mixed as people’s views on the drug itself. Some studies show that cannabis use can increase the incidence of violence and aggression, especially among younger people. Others show no causal relationship between marijuana and violent crime.

Some researchers have suggested that crime might increase in states where weed is legal. Dispensaries and growers are apparent targets. However, preliminary investigations indicate that the opposite is true, with some places seeing an overall reduction in crime following legalization. One possible explanation for this is better security in areas surrounding dispensaries.

While it is hard to say whether cannabis causes violence, we can say with some degree of certainty that alcohol misuse does. And let’s face it, nobody is going to stop you from owning a gun because you enjoy a few beers at the weekend! The fact that weed is not proven to increase violence will add insult to injury for gun owners who wish to use marijuana.

How Strictly are the Laws on Marijuana and Guns Enforced?

If you use medical marijuana and try to buy a gun from a licensed seller, you will probably be turned down. However, a survey of 1613 gun owners carried out in 2017 suggested that as many as 22% purchased their weapons without any background check. When it came to private sales conducted online, in person, or at gun shows, this figure rose dramatically to 50%.

However, the government is getting wise to this loophole in the law. Many states now require point-of-sale background checks for all purchases. Some states even require customers to obtain a special permit before even thinking about buying a gun.

But what if you already own a gun and want to become a medical marijuana patient? Does doing things this way round mean you can circumnavigate the law?

Unfortunately, although the answer to this question is less clear-cut, it is still technically no. Nobody is likely to ask whether you own a gun when you apply for your medical marijuana card. However, the law states that any unlawful user of a Schedule I substance should not “ship, transport, receive or possess firearms or ammunition.”

If you wanted to, you could probably choose to go under the radar, become a patient, and keep your gun. However, if you do so, you risk escalating any cannabis-related charges that you may face later on. You could also potentially receive a perjury charge.

Can I Become a Medical Marijuana Patient and Own a Gun? Final Thoughts

If you’re a medical marijuana user, you are technically breaking federal law, even if weed is legal in your state. Being an ‘unlawful user’ means that you are not permitted to purchase a firearm.

Anybody determined to own a gun and use cannabis in spite of this law will probably find a way to do so. There are still some unscrupulous sellers that allow you to buy a firearm without carrying out a background check. And you already have a gun, you can probably get a medical marijuana card without too much hassle.

However, if you decide to take advantage of these loopholes and get caught, you are in trouble! A possible hefty prison sentence for perjury is the penalty. Not something we would recommend.

Unfortunately, it seems you have to choose between breaking the law or making a painful sacrifice. So, which would you rather keep your gun or your medical marijuana card? Let us know in the comments below!