According to research, bisexuals smoke a lot of weed. To be more specific, bisexual women smoke a lot of weed. In fact, they smoke up to three times more weed than other communities. 38% of bisexual women have been found to use cannabis, as compared to lesbians and straight women with a total of 20% and 5% respectively. So the overall consensus is that bisexual women smoke the most cannabis, but the larger question at hand is why? Even bisexual men do not have the same reported cannabis usage as women. At first, it would seem that being bisexual is a factor until you realize that the rate is different within the bisexual male community…

When these statistics first came about, many people raised theories and hypotheses as to why this could be, and one of the possible explanations is due to anxiety and mental health. In general, bisexuals experience anxiety at a much higher level than straight or homosexual people. They are up to 80% more likely to have anxiety issues than somebody who is not bisexual. A lot of problems within the bisexual community, such as the lack of a strong support system and prevalence of biphobia generally have a say in why this anxiety seems to be so high in this community.

Additionally, a lot of the time, bisexual people do not feel that they fit into one or the other group as they are a little bit of both. This leads to a lack of sense of belonging or not being accepted and issues with personal identity.

Statistically, bisexual men have the most hardship with coming out, so you would think that they would have an even higher rate of cannabis usage if anxiety is at stake, but further research implies that the key to understanding this phenomenon is sexism. It could be that this additional struggle could be just enough to make women turn to cannabis while seeking out a new form of support.

This is, of course, just a theory, and nobody can say 100% confidently that being a woman and facing more discrimination leads to anxiety which perpetuates cannabis use. But the correlation between cannabis usage and anxiety is a very interesting topic. Marijuana has different effects on different people. For some, it can calm the nerves, while for others it can make anxiety even worse, and even bring about bouts of paranoia.

Does Cannabis Help with Anxiety? 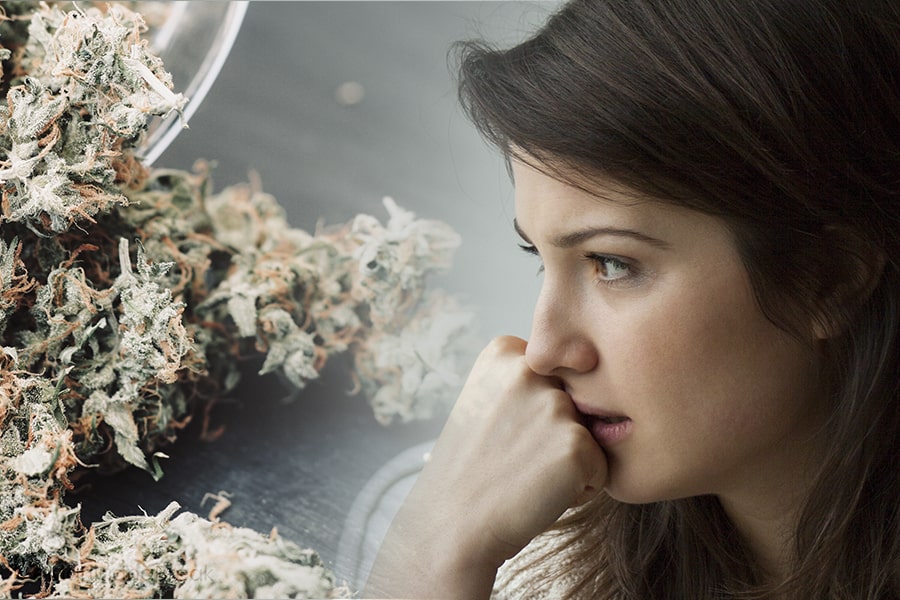 Many studies have found that cannabis can be effective in helping to relieve anxiety, but other studies show how cannabis can exacerbate anxiety. Overall, it’s up to the individual consumer to find the perfect strain for them. This means paying special attention to CBD and THC levels, but especially THC. The higher the THC content, the more likely it is to bring about anxiety, so perhaps seeking a lower THC strain is the best way to go about helping to reduce anxiety for some.

But even if anxiety has nothing to do with the amount of cannabis certain groups of individuals consume, another hypothesis would be that bisexuals have different personality characteristics which perpetuate them to seek out certain sensations.

Final Thoughts on Bisexuals and Weed

It seems a bit strange that you could reach a consensus that one group of individuals smokes the most cannabis, but lo and behold that is what has been found thanks to many surveys and vast amounts of research. Of course, there is a lot of potential for flaws and inaccuracies due to the nature of questionnaires and human error, but the general consensus is that bisexual women smoke the most weed. This is possibly due to facing a lot of problems with fitting in and identity, as well as with anxiety and mental health issues. The plethora and combination of problems, therefore, could lead to an increase in cannabis use as an attempt to soothe the nerves and lessen anxiety.

Upon interviewing many bisexual women, it has been found that mental health is primarily responsible for the greater surge in cannabis use amongst this population, but that, of course, is not the case for everyone. Therefore, the results will remain open to interpretation and speculation while keeping the theory in mind, so as to provide an insight into this interesting and thought-provoking phenomenon.

It's not all bad news

0
8 min read
How Much Marijuana Is It Possible to Smoke in a Month?

These figures will blow your mind!

Some of these are perfect gifts...

4
5 min read
Cannabis Dosage Guide: All The FACTS and More