There is unquestionably a ‘disconnect’ between many states in America when it comes to marijuana legality. We have cannabis-friendly states such as California, Colorado, and Oregon on one side. On the other, there remain staunch anti-weed locations, including Indiana, Idaho, and Louisiana.

Although an increasing number of states have decriminalized pot, not every place has embraced this rational thinking. The sad story of Fate Winslow is a case-in-point. The homeless man was jailed for life in Shreveport, Louisiana because he acted as a middleman in a $20 marijuana deal. Winslow previously served eight-and-a-half years for stealing from an unlocked car.

His conviction for a cannabis crime meant he was classified as a ‘habitual offender’ under Louisiana law.

Data from the American Civil Liberties Union in 2015 suggested that 69 people were ‘lifers’ for marijuana crimes. The Clemency Report revealed that between 1996 and 2015, judges had sentenced 54 people to life in prison without parole for a weed crime.

Although an increasing number of states have decriminalized pot, not every place has embraced this rational thinking.

In numerous cases, the ‘offenders’ committed the dastardly deed of selling a few grams of marijuana to consenting adults. Overall, an estimated 40,000 people languish in an American prison for a cannabis crime.

Unfortunately, it is a case of not getting caught in the wrong state. A majority of states have recently decriminalized the possession of small amounts of weed. It is called a ‘civil infraction,’ and the penalty is a small fine in these places. The incident doesn’t end up on your permanent record. Many so-called ‘red’ or ‘conservative’ states tend to have the strictest anti-cannabis laws.

Does Mississippi follow suit? Let’s find out. We also investigate how CBD is perceived in the Magnolia State.

Is Medical Marijuana Legal in Mississippi?

The answer is ‘yes and no.’ On November 3, 2020, 74% of voters said ‘yes’ to Initiative 65, a measure to legalize medical marijuana. However, at the time of writing, it is still illegal to possess MMJ in Mississippi.

According to Initiative 65, the Mississippi Department of Health must create rules and regulations for an MMJ program by July 1, 2021. The Department is also supposed to issue ID cards and treatment center licenses by August 15, 2021. Realistically, registered MMJ patients won’t be able to buy cannabis legally until the end of 2021. 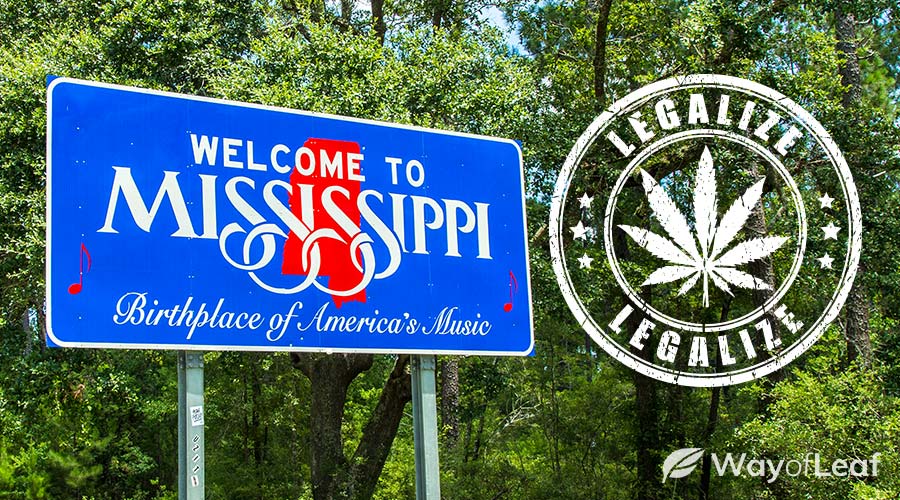 Initiative 65 states that 22 medical conditions qualify for an MMJ card. These include, but are not limited to:

Once the program begins, MMJ patients can possess a maximum of 2.5 ounces every 14 days. Unfortunately, Mississippi residents are not permitted to cultivate cannabis at home. On the plus side, local towns are unable to ban MMJ.

What Are the Penalties for Buying, Selling, and Possessing Cannabis in Mississippi?

Until the state begins issuing MMJ cards, cannabis remains illegal in Mississippi. Therefore, individuals are still subject to fines and possible jail time for sale, possession, or use.

Although Mississippi law has decriminalized possession of small amounts of weed, the state issues harsh penalties beyond that. When caught with under 30 grams of cannabis, a second offense is a misdemeanor and results in up to 60 days in prison. A third offense could see you spend up to six months in jail.

If you have over 30 grams of marijuana, it is a felony crime with a jail term of up to three years. It doesn’t matter if it is your first offense. The difference between having 30 and 31 grams of weed on your person in Mississippi is profound! Once caught with 250+ grams, you could receive a prison term of eight years.

The sale of any amount of cannabis in Mississippi is a felony and carries jail time of up to three years. Once the amount exceeds 500 grams, the maximum sentence increases to 20 years. Incidentally, selling to a minor or within 1500 feet of a church, school, or another designated area, is a felony that carries double prison time and fines.

Therefore, if you sell 10 grams to someone outside a school, you could spend six years in jail. You also receive a $6,000 fine. Of course, the money is the least of your worries in that scenario.

What Is the Situation with CBD in Mississippi?

The 2018 Farm Bill may have legalized industrial hemp cultivation. However, it didn’t permit the use of CBD on a federal level. As a result, each state has different cannabidiol laws. In Mississippi, CBD oil is legal for medical use. That is, as long as a licensed physician in the state obtains it for a patient. The physician must directly supervise the administration of the oil.

This is due to House Bill 1231, legislation passed by both House and Senate in 2014. It is a restrictive measure, as the CBD must come from one of three approved research centers. It must also contain at least 15% CBD and a maximum of 0.5% THC.

Moreover, only patients with a debilitating epileptic condition need apply. What if you don’t have a catastrophic seizure disorder or intractable epilepsy? Can you still legally purchase CBD in Mississippi?

Fortunately, the state has recently changed its stance. Mississippi has become slightly less harsh in its anti-cannabinoid crusade. Lawmakers passed SB 2610 in 2017. It permitted CBD use in the research of several medical conditions, including the treatment of seizures. However, it wasn’t until July 2019 that the state officially legalized a form of CBD to the general population.

Patients with MMJ cards should have no issues purchasing CBD in Mississippi once the medical marijuana program commences.

Where Can I Buy CBD in Mississippi?

If you decide to use CBD in Mississippi, make sure you only use brands that offer third-party lab reports. This information enables you to determine how much CBD and THC are in each product. Otherwise, you could find yourself in trouble. The possession of any amount of CBD, with over 2.5mg of THC per ml, is illegal. Police in the state will also arrest anyone in possession of a product that resembles cannabis.

There are no limits on how much CBD you can buy if it falls within the legal parameters. There are also a growing number of physical stores that sell CBD in Mississippi. However, you will find that it is a better idea to rely on a reputable online brand. Top-rated companies such as PureKana and Premium Jane sell to most states with a handful of exceptions.

Does Mississippi Have an Industrial Hemp Program?

The answer is ‘yes,’ finally! The 2018 Farm Bill legalized the cultivation of the crop. However, the onus is on states to take the first step. This involves submitting a hemp growing program to the United States Department of Agriculture (USDA) for approval. Mississippi was one of the few states to hold out on legalizing hemp growing initially.

This is despite the existence of the Mississippi Hemp Cultivation Task Force, created as part of HB 1547. The Commissioner of Agriculture and Commerce was told to complete a detailed study of the possible costs and benefits of hemp. When the Task Force met in December 2019, it became clear that farmers would not get to grow hemp.

Related article
Is Industrial Hemp Legal in My Area? [State by State Breakdown]

Fortunately, common sense prevailed in the state. In March 2020, the Mississippi Hemp Cultivation Act easily passed the House. The Senate then amended the bill, and the House concurred with the changes.

Mississippi finally passed the Act into law in June 2020. It legalized hemp cultivation and directed the Commissioner of Agriculture and Commerce to create a plan. However, farmers in the state looking to grow hemp must send their USDA hemp production applications to the USDA. This is because Mississippi lawmakers decided not to provide the funding needed for a state program.

The application period ended in October. Those who successfully applied can cultivate hemp in 2021.

Final Thoughts on Cannabis and CBD Laws in Mississippi

The fact that Mississippi legalized MMJ and permitted the growth of hemp in 2020 surprised many. However, the medical marijuana program won’t begin in earnest until the second half of 2021. Until then, its sale, use, or possession all remain illegal.

If caught with less than 30 grams, all that happens is that you pay a fine. You can face jail time if found in possession for a second time, however. Also, the ownership of more significant amounts, and sale of any quantity, become felony crimes with harsh penalties attached.

As far as CBD goes, those who live in Mississippi are now free to purchase it.

As far as CBD goes, those who live in Mississippi are now free to purchase it. However, products must contain at least 50mg of CBD per ml and a maximum of 2.5mg of THC per ml. MMJ cardholders will face no such restrictions once the cannabis program begins.

In some ways, the state’s stance on cannabidiol isn’t a bad compromise at all. Customers are guaranteed products with significant amounts of CBD. It is handy in an unregulated industry to know that you’ll get plenty of CBD for your cash. Also, the low THC level means you don’t have to worry about getting stoned. Make sure you only buy from physical stores or online brands that provide third-party lab testing.

We take a closer look at the research

1
6 min read
Marijuana Related Deaths: What You Don’t Hear in the News

The unbelievable truth behind marijuana prohibition

You might be surprised how much things have changed!

1
3 min read
Marijuana and Rastafarianism: Things You Need to Know

2
3 min read
CBD Crystals: 4 Ways to Use Them for Maximum Potency

1
6 min read
5 Countries That Have the Strictest Cannabis Laws EVER!