The good news is that a total of 33 states, plus Washington D.C., have legalized marijuana for medicinal or recreational use. Unfortunately, federal employees have to keep their hands out of the weed cookie jar because it remains illegal.

In 1986, President Ronald Reagan signed an Executive Order. It stated that the federal workplace must remain a ‘drug-free’ zone. It came at the height of his failed ‘War on Drugs.’ In Executive Order 12564, Reagan wrote that drug use had significant adverse effects on a large percentage of the national workforce. The result was billions of dollars of lost productivity annually.

According to the Order:

On the plus side, the Order also stated that the government would not discipline employees who voluntarily looked for rehabilitation or counseling after taking drugs. This was as long as they steered clear from illegal drugs in the future.

Following hot on the heels of the Executive Order came the Drug-Free Workplace Act, just two years later. It stated that some federal contractors and all federal grantees agreed to ensure drug-free workplaces. They did so as a precondition of receiving a grant or contract from any governmental agency. It only applied to firms with deals worth $100,000 or more.

Here are some of the Act’s provisions:

What Can Federal Employees Expect in a Drug Test?

There are a lot of organizations involved in federal employee drug testing. SAMHSA administers the program. There is also policy oversight by several bodies, including the:

If you intend to join the four million federal employee workforce, you must pass a urine test at the very least. If you’re applying for a high-ranking position that involves access to sensitive information, expect to take both urine and hair follicle tests.

You will receive an email with your appointment time and the address of the test location. Usually, you get no more than two days’ notice. When you show up, you must provide a state or federal-issued photo ID and fill out paperwork.

Prospective employees who take opioids must bring the bottles with them and explain that they have a prescription.

Next, lift your shirt and pant legs to ensure you have not tried to smuggle clean urine in. Then you’ll receive a cup and be told to fill it to a particular line.

They have already checked you for fake pee so that you might get a little privacy in a private booth. However, you may find that the tester can watch you. Finally, hand the sample to the administrator when you’re finished. Do not flush the toilet or place a lid on the cup. You will receive your results in 3-5 days.

As you probably know, the drug test looks for THC metabolites (THC-COOH) in your urine. At the time of writing, the initial drug cut-off level is 50 nanograms per milliliter (ng/mL). If you test positive, a gas chromatography mass-spectrometry test is used to confirm the sample. In this instance, you ‘fail’ if your urine contains 15+ ng/ml of THC metabolites.

Change Is in the Air

It is not just marijuana that’s on the federal employee banned list. As well as the usual suspects such as cocaine and heroin, the government is cracking down on opioid use amongst federal employees. 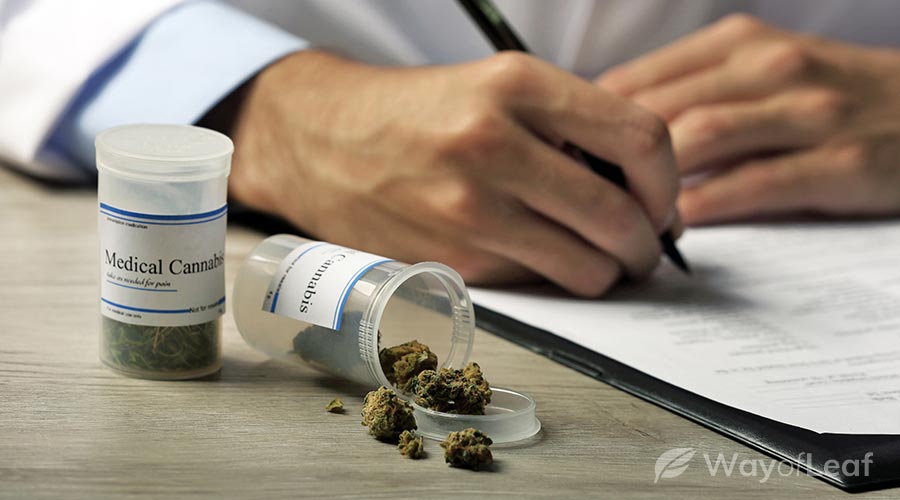 On October 1, 2017, new federal mandatory guidelines for drug testing became effective. It provided the authority to test for four semi-synthetic opioids: Hydromorphone, Hydrocodone, Oxycodone, and Oxymorphone. You may know them by their brand names such as Vicodin and OxyContin.

Federal employees must provide evidence that they have a legitimate medical reason for using these drugs, accompanied by a valid prescription. Failure to prove this information is a potential reason for dismissal. It is an interesting development and a clear sign that the government has finally become concerned about the opioid epidemic.

A Bold Bid to Change Things

In the meantime, there is potentially great news for marijuana users who, up until now, have had no chance of landing a federal job. In July 2018, Democrat Party Congressman Charlie Crist introduced the Fairness in Federal Drug Testing Under State Laws Act; it was co-sponsored by Republican Party Congressman Drew Ferguson.

According to the bill, the government could no longer deny employment or dismiss existing employees who tested positive for marijuana in states where it is legal. It contains several reasonable provisions, which means it has a chance of being passed into law. For example, it will not apply to federal employees with access to classified information or highly sensitive programs. Also, it will not protect individuals believed to be under the influence of weed at work.

At the time, Crist’s bill failed to advance after being introduced in the last session of Congress. However, he reintroduced it in early 2019. As Crist said, for federal employees who comply with their state’s cannabis law, they shouldn’t have to choose between their job and a proven treatment.

The bill also protects the cannabis treatment options available to veterans. Crist pointed out that marijuana can help address PTSD and chronic pain. The government is the largest employer of the veterans’ community. Crist said that the conflict between medical care and maintaining employment has to be resolved.

The bill is backed by several groups, including the Veterans Cannabis Coalition and NORML. However, at the time of writing, it has not made progress.

CBD is becoming a popular method of managing the symptoms of various medical issues. Unlike THC, it is non-intoxicating, so there is no question of attaining a ‘high.’ However, even though hemp is no longer on the controlled substances list, CBD is. It also comes from marijuana, and all cannabinoids remain illegal on a federal level.

In theory, there is no issue if you use CBD products because the compound doesn’t show up on a standard drug test. Remember, the goal is to find traces of THC-COOH.

The Farm Bill of 2018 permits the cultivation of hemp with a maximum THC content of 0.3%. Most CBD sellers ensure their products remain well below that threshold. However, the industry remains unregulated, and a staggering number of CBD oils do NOT contain the cannabinoid content listed on the label.

The FDA doesn’t certify these products, so you could unknowingly consume a CBD product with a detectable level of THC. Towards the end of 2019, several federal departments issued memos outlining their respective CBD policies. The Department of Defense and Navy issued a statement saying that members are banned from using CBD.

NASA told staff that CBD could contain unlawful levels of THC that jeopardizes their jobs. The Air Force released a memo saying that airmen should not use cannabidiol products. If these announcements affect you, it is probably best to play it safe. You could also look for brands that provide lab testing with their products. However, you are still taking something of a risk.

If Crist’s bill passes, all federally-funded employers would have to respect state’s rights with regards to marijuana. The legislation would ensure that federal employers would treat weed in a similar manner to alcohol consumption. If you have a prescription or live in a state where marijuana is legal recreationally, you could use it while off-duty.

Until such a time comes as the bill gets passed, however, federal employment is off-limits for marijuana users. It is a rule based on outdated information and, hopefully, common sense will prevail. Recent developments also mean that even CBD users must exercise caution. Only buy from reputable brands that offer full third-party lab reports. Otherwise, there is a risk of testing positive for THC metabolites in a drug screening.