Marijuana grown in suboptimal conditions can develop mold. It is also a problem if you don’t cure and dry your weed correctly.

Tens of thousands of people consume moldy cannabis without realizing it. Inhaling the thousands of microbial spores is terrible news for your health.

If you consume moldy marijuana, the best-case scenario is that the awful taste puts you off the herb entirely. However, if you continue to use it, you could end up in the hospital with a lung infection. You are more likely to buy this kind of pot if you get it from the black market. Reputable dispensaries will dump any moldy marijuana they find. Or at least they will if they want repeat customers.

Unfortunately, despite the best efforts of the industry, moldy cannabis remains a problem. In Colorado, companies have recalled entire product lines because of potentially harmful yeast and mold.

In July 2019, for example, a dispensary named Universal Herbs recalled its products. It found that pre-rolled joints of the Blue Cookies strain tested positive for mold and/or yeast.

In the past, the majority of recalls had to do with excessive levels of pesticides. However, alarmingly, recalls due to positive mold tests in Colorado have increased in the last few years.

More troublingly, City of Denver investigators tested a couple of dozen dispensaries in 2019. The tests looked for yeast, mold, and pesticides in products. An incredible 80% of dispensaries failed the tests.

What Prevention Measures Are in Place?

In a bid to combat mold, some companies have fallen back on chemical fertilizers to keep the problem at arm’s length. The thing is, mold is everywhere because it is part of life on Earth. It is easy to spot on food, but not so simple to identify it on marijuana. Many people say that lingering chest pains after using weed are down to moldy cannabis. However, fertilizers and pesticides could also cause these problems.

Some believe that the issues surrounding mold are overstated. These individuals suggest that weed with a little powdery mildew is less harmful than pesticides. At present, customers looking for lab-tested products pay more than they would for non-tested weed. Then there is the possibility of the marijuana developing mold once it leaves the lab!

The operations managers of cannabis farms must find methods of eliminating mold and yeast. They also have to ensure the marijuana remains suitable for human consumption. Outdoor farms have significant issues to deal with. Although cannabis grown outside is not inherently moldy, changing weather conditions can wreak havoc.

Wind transports spores, which spread mold. It is important to remember that labs see every spore as a colony-forming unit. Therefore, good cannabis can fail microbial testing if tests uncover benign spores. A single square centimeter of mold can produce over 2 billion spores! If all of them landed on weed, it would cause an incredible 450 pounds of herb to fail testing!

Is a Weed Washer the Solution?

‘Yes,’ according to Jill Ellsworth. She founded Willow Industries. The company developed a machine capable of decontaminating moldy weed to the stage where it is fit to use.

Ellsworth claims that her machine has ‘helped get marijuana out of quarantine.’ Certainly, her idea has captured the imagination in Colorado. In fact, her company quickly raised around $2 million for funding as it got ready for the market.

She spoke to Westword, one of Denver’s biggest independent cannabis news sources, about her company’s creation. Ellsworth said it was necessary to use technology already utilized in other industries. She knew that the food and agriculture sector used ozone gas on contaminants. Therefore, she decided to try it out on marijuana. 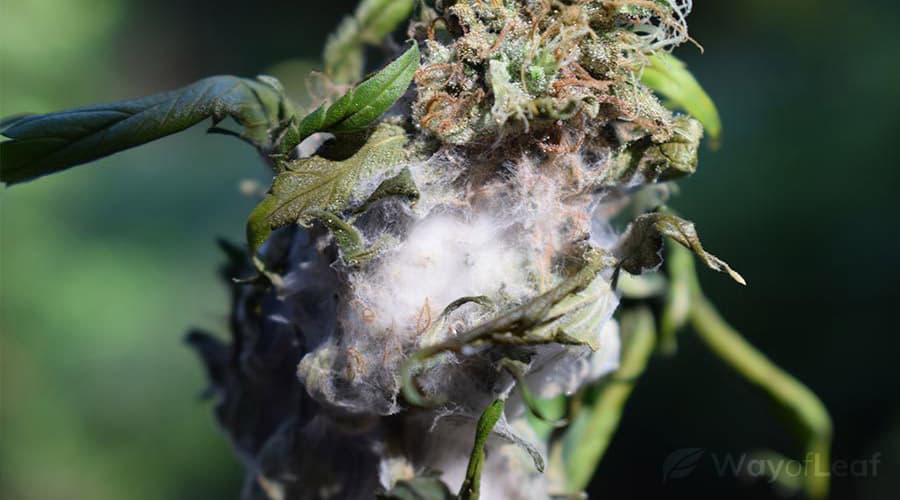 The molecules attack the pathogens and break down the cells to the point where they become unrecognizable. At this point, they are unable to cause illness in consumers. Ellsworth said that the goal was to clean the marijuana without destroying terpenes or cannabinoids.

Willow Industries initially operated in a handful of states. The company had a breakthrough in December 2018 when it helped Doctors Orders, a marijuana dispensary group in Colorado. The dispensary voluntarily recalled its retail marijuana plant material due to issues over yeast and mold. With the help of Willow, Doctors Orders’ cannabis passed state testing.

Today, Willow Industries serves the entire United States. All of its specs are in accordance with National Fire Protection Agency Standards and OSHA. It also has an establishment number with the EPA.

What Is Ozone? And How Does It Work?

Ozone is a triatomic atom, which is also called O3. It is, in essence, oxygen, because it comes from oxygen. In the Willow Industries system, ambient oxygen gets pulled out of the room it is in by the machine. The machine then concentrates the oxygen and puts it through an electrical charge.

At that stage, it adds an O-negative molecule, so O2 becomes O3. Next, it oxidizes, so the O-negative drops off and is converted back to oxygen. The cycle is constant and involves oxygen with no other gassing.

At present, Willow focuses only on flower, but the company will eventually look into ways to clean cannabis oil. The issue here is that ozone is a gas, making it hard to use with a liquid.

Ensuring the flower’s terpene and cannabinoid content aren’t affected is a case of proper ozone concentration. If you use too much ozone, you will ruin the flower. Willow has come across the right balance after a lot of hard work and testing.

When the weed comes out of the machine, it remains covered in ozone molecules. However, they off-gas and degrade back to oxygen. After three days, the bud looks and smells the way nature intended.

What Equipment Does Willow Industries Sell?

Barring the WillowPure 5, these machines have wheels and brakes, so you can move them around easily. When you get a machine from Willow, it sends a team of experts to your facility with the equipment. They process the plant materials and prepare samples for testing.

If you want to learn more about leasing Willow’s equipment, go to its official website.

Other Options for ‘Cleaning’ Moldy Weed

Marijuana is well on the way to legitimate status. As a result, we are sure to see even more regulations that will bring cannabis production standards closer to food production. In Canada, along with Colorado and Nevada, weed must have a total mold and yeast count of less than 10,000 colony-forming units (CFU) per gram.

Related article
How Long Can You Store Weed Before It Gets Moldy? [Answered]

Ditch the plastic bag and opt …

In Connecticut, the CFU limit is just 1,000 per gram. However, in Florida, it is 100,000 CFU per gram! It is extremely tricky for growers to ensure their cannabis passes the standards in their state. You need to perform detailed research, and invest in a reliable way to ensure your products pass any test they face.

There are now various marijuana mold and yeast treatment options, and we have outlined a handful below.

This is a cheap method of reducing the level of yeast and mold in weed. However, it kills the quality unless you plan to extract cannabinoids and terpenes from it.

Willow Industries uses ozone, which is challenging to scale. Overall, this is an inexpensive method that treats the entire batch but is time-consuming. It is also important to note that the gases used are toxic to humans, which means careful handling is essential. Ethylene Oxide, Sulfur Dioxide, and Propylene Oxide are also used and are more scalable than ozone.

The use of gamma rays reduces microbial growth and retains potency. It is a scalable, quick, and effective method that keeps terpene and cannabinoid levels high. However, this method also utilizes ionizing radiation that creates new chemical compounds. Some of these compounds are carcinogenic.

The United States Department of Homeland Security won’t allow this method because it involves using a radioactive isotope to create the gamma rays.

This is the gold standard when it comes to extracting cannabinoids and terpenes to create concentrates. It does a fantastic job of killing almost every toxin and is easy to access. However, it takes a lot of time and expertise and is only for use when creating potent extracts.

This involves spraying your plants with a hydrogen peroxide solution. While it reduces mold and yeast, it also increases moisture. This process could cause the germination of benign spores. Also, hydrogen peroxide spray only treats the plant’s surface level. It leads to extreme oxidation and removes terpenes while burning the plant.

This is likely to become one of the primary methods of choice for large scale treatment facilities. It is non-toxic, non-chemical, non-ionizing, and organic. It treats 100% of the product at once, is scalable, and very effective. Plus, it retains potency and terpenes. Radio frequency is widely used in the food industry and is likely to make waves in the cannabis field. There are machines capable of treating 100 pounds of weed in an hour!

A Summary of the “Marijuana Mold-Cleaning” Machine

The industry has now grown to the point where the standards of marijuana production must increase. Although it remains a federally illegal substance, it is also a multi-billion-dollar industry.

Customers do not want moldy marijuana, nor do they want their herb treated with chemicals.

For growers and sellers, the goal is to find an affordable and effective way to ‘cleanse’ weed to make it ready and safe for use. We can look forward to a future where clean marijuana is standard in legal states. Any company that fails to comply will face severe penalties in this scenario.

How the “Stoner” Lifestyle Has Changed Over Time

You might be surprised how much things have changed!